Voices of Biddeford interview with Ted Truman on October 14, 2021

Theodore (Ted) Truman was born in Biddeford in 1929. He is the son of immigrants who escaped the persecution of Greeks in their native Turkey. Ted's father came to Biddeford as a young man with his brother to work at the Pepperell. They eventually started a grocery store. With very humble beginnings and hard work on the part of the entire family, Throumoulos Market developed a niche in the greater Biddeford area. Ted traveled the world as a chief engineer and Lieutenant Commander in the US Navy. Ted, his three brothers and three sisters established a number of successful businesses. Ted married Norma Smaha when he was 40 and together, they ran the Cascades restaurant in Saco until 1985.

In his interview he shared the evolution of his father and uncle's milk delivery service to the highly regarded Throumoulos Market; Ted's involvement in the grocery business from a young age; providing specialty services for prominent Kennebunkport families; the inter-connectedness of various ethnic groups and businesses; why his brother, Paul (well-known for Truman's Driving School) was in Ripley's Believe it or Not; Ted's education as a maritime engineer; working on the Onassis and Isbrandsten international shipping lines followed by service in the Navy during the Korean War; a history of the Cascades and how he grew the business; supporting his brother Plato's political aspirations; unique experience with Halley's Comet while flying on the Concorde supersonic plane; and the name change from Throumoulopoulos to Throumoulos to Truman.

NOTE about below photo: Ted's father, Peter Throumoulos, was born in Ordu, Turkey in 1886. He first came to Biddeford as a young man along with his brother, Louis. Peter made periodic trips back to Turkey and married 17-year-old Marika Ifantides in a traditionally arranged marriage. Peter kept returning to Biddeford, where he and Louis grew their grocery business. He would return periodically to Marika and their children who were in Turkey, then Greece. In 1929, they all immigrated to Biddeford. He died at the age of 53. 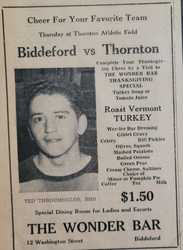 Ted and Norma (Smaha) Truman on Concorde's last flight in 2003

Ted and Norma (Smaha) Truman on Concorde's last flight in 2003