A story by John C. Decker, Danville, Pennsylvania from 2021 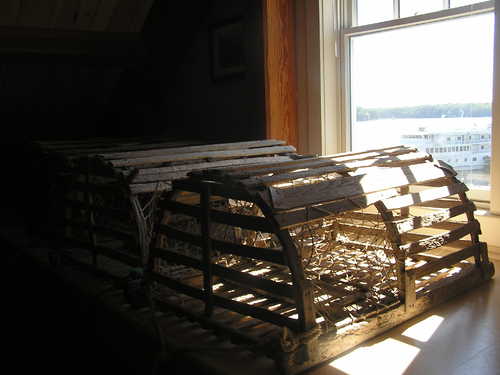 Typical Maine scene at the Maine Maritime Museum in Bath

Typical Maine scene at the Maine Maritime Museum in Bath

Before the memory starts to seriously fade, I will include little snippets of what I remember from the annual conference of the Lexington Group for Transportation History from September 7th-12th, 2021 in Maine:
Within minutes after hopping in the taxi at the Portland International Jetport, I recall starting to see two-family wooden houses of a style not found in any location where I have lived: And Portland truly has
a lot of these houses. Whether as a group they have a name, I don’t know.

In five days, I never heard the classic Maine accent. My friend from the U.S. Navy, Jim, certainly had it, a really strong one, and also the distinction of having lived some of his childhood on Matinicus Island, just as far out into the Atlantic as famous Monhegan Island, but not as well known.

One of the speakers at our conference stated that there was a period in the 19th century when Maine was one of the nation’s wealthiest states. It surprised me because for many years I had been hearing about depressed Maine mill towns, dominant industries closing because of competition from abroad, down-and-out people, whole neighborhoods on welfare, etc. There was a time obviously when this wasn’t the case.

The final night of our Lexington Group conference, there was a wedding reception, a noisy and happy one, at the Westin Harborview Portland Hotel. This was Saturday evening, September 11th. I asked a member of the bridal party whether the bride and groom had given thought to the grim anniversary of the attack on September 11th, 2001, the thought that for the rest of their lives, people whom they would meet would make a sour face at first when learning what day they were married. This bridesmaid said, this was the day they could get for the reception, so they took it.

If I had had one more day in Portland, I would have visited the Portland Cryptozoology Museum ("the only museum of its kind in the world!") Even the name is unforgettable.

I loved the fold-out, magnifying mirror in my room at the Westin Hotel. Using it, I probably got the closest, most complete shaves of my life.

The final day of the conference, we had to board buses and ride about forty miles to get to our destinations, which were close together. Someone on the bus saw the unending pine trees by the road and commented, "That’s what they also say about the Downeaster (Amtrak passenger train to Maine), that you spend most of your time looking at trees, trees, trees."

The Press Hotel in downtown Portland has several shuttle buses decorated in a memorable way: perfectly white exterior bodies, except for individual black letters, upper and lower case, set at crazy angles to each other, not forming any particular words, and of different sizes. They go with the general "typewriter" theme of the hotel's décor.

We took several hours of a cruise around Portland's harbor and part of Casco Bay, and I failed to note the name of the ship we were sailing on.

Normally girls wear their best jewelry front-on, but Christina, the girl from Moldova whom I met on the plane to Portland, had an elaborate arrangement with rhinestones in a cross pattern, carefully arranged on the back of her head. By the time I noticed it, it was too late to ask her about it, whether it was an ethnic thing from Moldova or not. Everyone was departing from the plane at Portland, which was already on the ground.

The organization I belong to, provides a thumbnail biography for each speaker prior to his or her speech. It so happens that the first speaker of this conference on the first day was our president, Albert Churella. The man who introduced him said Albert was a man of contrasts, heavily involving himself in things very large and very small. The large thing was the history of the Pennsylvania Railroad, which, I thought, no one would have the courage to tackle. Not only did he tackle it, but he completed it in three hefty volumes. The very small thing was building models of various scenes on the two-foot-gauge railroads of Maine (no other state has railroads with such a narrow gauge). Small models of very small trains.

The stairwell of the Westin Portland Hotel, where I stayed, became my friend during the four days of the conference. Overall, I probably saved many minutes going down the stairwell from the seventh floor instead of using the always in-demand, always crowded elevator. The hotel is over ninety years old, so some of the carved graffiti I saw in the stairwell could be from 1927, or even earlier, if the contractor’s men cut the letters with their tools.

Maine must have the same anti-billboard regulations as Vermont does. In traveling along I-295, U.S. 1, and I-95, I saw virtually no billboards apart from at the location of the store itself.

I had not heard the cries of seagulls in over two years, and it was a welcome sound when I got to Portland, walking on Commercial Street and other streets. Naturally we had not gone to the Delaware shore, which is where we hear gulls, or any other shore, in 2020, the first pandemic year.

In the nineteenth century one of the most important buildings on the waterfront in Portland must have been the Customs House. I walked by it on Commercial Street and immediately sensed that it was an important historical object. I learned nothing about its history or what’s inside the building currently. The rain that day deterred me from taking any more steps than necessary to get to the next destination.

The homeless of Portland behave like homeless men and women everywhere. It had been many years since I had seen a man scouring the gutters and underbrush in search of anything metallic and recyclable that could be turned into cash. None of them panhandled me for money, though.

The multi-function building in Sheepscot, Maine, that serves among other things as a gift shop, had a very, very old black telephone on the wall. I was not tempted to pick it up and see if I could hear a dial tone. It must have dated from 1930 or so. Sheepscot Station is currently the southernmost point on the Wiscasset, Waterville & Farmington Railroad.

Check out the geographical patterns of Maine, and you will see that all commerce seems to be oriented north-south. The peninsulas extending into the Atlantic, and rivers, run north-south, and that pattern was repeated when railroads and paved highways were built. The one major exception was the International of Maine Division of the Canadian Pacific Railway, constructed in 1888. Its east-west alignment is unique in Maine. We as a family rode across Maine on this route in July 1994. It must have been a nightmare for customs agents to deal with, as this VIA train, (the Canadian equivalent of Amtrak) ducked out of Canada’s Quebec Province, went overnight through Maine, and then came back into Canada at the international border town of Vanceboro, Maine. The other side of the river is the province of New Brunswick. I slept through it all, in VIA’s sleeping car, and so did my family.

Not once did I turn on the big-screen television in my room at the Westin Hotel. Commercial television now seems like a relic of the past to me.

A teenage girl who, with some others, was promoting some kind of cause at a rally just up High Street from the hotel, where the street intersects Congress Street at a very small city park, gave me one wrapped chocolate kiss to publicize or commemorate something, I don’t know what.

Bob introduced me to his long-time friend John Hedrick, and John and I had a conversation about a real geographical oddity, a ghost railroad. In Maine. There is a vast wilderness in the northern part of the state where there are almost no roads and certainly no railroads, or so I thought. Then I found out about the Eagle Lake & West Branch Railroad, a logging railroad operating from 1927 to 1933. Connecting with no other rails, the E.L.& W.B. had to be installed the hard way, via local rivers and lakes. When the Great Depression began, its owners decided not to bother to try to take out any of the hardware. They just left it in place, and now it is a minor tourist attraction for rugged hikers and other wilderness explorers who do not mind getting their feet wet. Yes, John had heard stories about it.

A refrain kept going through my mind the whole time of the conference, like an earworm: The mocking Republican ditty aimed at the only man from Maine to be nominated for U.S. President by any major party, Democrat James G. Blaine. I believe it happened in 1876. The ditty went like this: James G. Blaine, James G. Blaine! The continental liar from the State of Maine! It made me wonder whether Blaine’s home still existed, whether it was in Portland, and if so, was it a museum?

I felt bad that the twentieth anniversary of the attacks on the World Trade Center and the Pentagon were scheduled to occur on absolutely the busiest day, the final day, of our conference. I generally do not want it to be forgotten, but no possibility existed to do it any other way. The hotel graciously waved the cancellation fees from the previous year for our group. I saw only one sign of the anniversary being commemorated. A girl walked north, unaccompanied, along U.S. Route 1, near Bath, carrying a U.S. flag. It must have had to do with ceremonies that had taken place earlier at the Bath Iron Works. 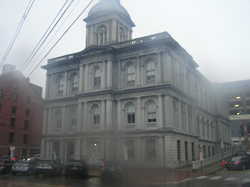 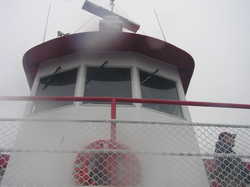 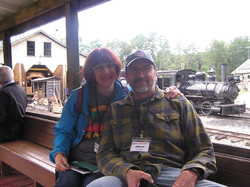 President of the Society & spouse at Alna, Maine on the WW&F Railway

President of the Society & spouse at Alna, Maine on the WW&F Railway