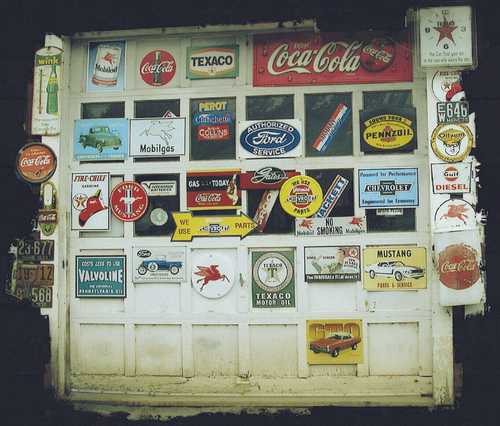 As the road reached the bottom of Rome Hollow, I pulled into the wide gravel drive and picked a spot to park the car against an old building. Queen Anne’s Lace and Goldenrod danced in the wind along the bottom of the foundation. As the dust settled, I noticed two men discussing business in the doorway of the long, single story barn-red building.

They turned to look at the newcomer and broke off their discussion. As I got out of the car, the shorter of the two gave me a warm greeting and wondered what he could do for me. I thought the auction started at 1 pm (which it now was) but noted on a sign that it was at "600." "I came to see about the auction, but I see that it starts at 6. My husband told me it started at 1."

As I entered through the doorway, I could see various sized tables neatly organized in the room and rows of folding chairs in the back. Numerous chairs toward the front had foam pads on them. Some were covered with hand crocheting, others with various types of cloth. Some were even double layers. Chairs toward the front had pieces of paper taped to the backs with individual names on them "Barbara, Bill, etc." Favored spots for the regulars. The wall behind the chairs was a large garage door. Off to the side was a 'refreshment stand' and a table with sugar, spoons and such for coffee or tea.

The rows of tables in the center of the room were laden with various knick knacks, hand-decorated wooden boxes, a set of pig sugar and creamer, a doll’s bed, small cabinet from an old store which held drill bits, vases, old wooden crate with a company name stenciled on the side and such odds and ends of everyday stuff. At the end of one row of tables was a large cedar chest. It must have been about 28 inches high, 4 feet long and 2 feet wide. It had some nice edge carving on the outside, with fancy work on the side handles. It would be nice if someone had enough room for it.

I remarked to the owner, Harold Hawes, that my husband’s uncle was Jim Coyne, and that he had a friend named Harry Hawes who lived in the house up the road. He said that was his uncle and he actually remembered Jim Coyne. "He had a sawmill that did quite a good business not far from here."
"Yes, up in Mercer," I said.
"Yes, that’s right. I used to go up there with my Uncle. He did a big business. He employed 6-8 men, which was a big operation in those days. The men probably made 75 cents a day which was good pay."

Over the course of the conversation, he told how his uncle, Harry Hawes, and two of the Mosher boys and another man used to go hunting in the woods around here. They would catch a lot of rabbit and fox and skin them in a barn that was just across the road. They would sell them locally. Sometimes, they even caught mink. I mentioned how you used to be able to see rabbit and fox pelts at Day’s store in Belgrade Lakes. He continued how the great grandfather of the present owners had started that store and how it had changed over the past few years.

I was fascinated watching Harold talk. He had 4 distinct lower teeth that was about all you could see that was in his mouth. He had a toothpick in his mouth, which he moved with his tongue back and forth across the four teeth. It moved in a regular rhythm as he talked. His salt and pepper beard was well taken care of and you had to look up under the brim of his baseball cap to get a look at his eyes behind his thin-rimmed black glasses. He told me "I love people, any kind of people, I don’t care if they buy anything or just come in and look." At this point I asked him if it would be all right to take some photos outside the shop. He said, "Didn’t bother him attal." He then showed me a newspaper clipping that he had on the wall. It was an article about his auction barn and had a photo of him by his front door. He was pretty pleased with that.

I went and got my camera gear and started taking photos of the front of the auction barn. There were many old signs tacked to the wall and around the doorway. One sign said that this was a historic site. It was the first building in the USA to be condemned. There was an old gasoline pump and air pump. Numerous chairs neatly arranged outside the doorway for the auction. As I worked away I didn’t realize what was happening, but he opened a door into the garage part of the building. Somehow I was led into the garage as he kept talking. He wanted to show me all the tools that he had in the garage. High up on the wall was a picture frame containing car inspection stickers from the 1930s. There was a gold metal sign perpendicular to the wall that said, "Inspected and Licensed - 1927 – Maine State Dept of Health." He said he was offered $200 for the sign. It didn’t belong to him though. It belonged to an 82-year-old man. If the man died first then Harold got the sign, otherwise it belonged to this man.

Abruptly, I noticed that there was a sparkly old 1928 Ford coupe convertible behind me that had been restored. It was beautiful, with a rumble seat, all leather. It had separate movable glass windbreakers on the side. When I looked inside I was overtaken with nostalgia. It looked just like the inside of the 1938 Ford coupe that my father had - with a rumble seat. He said I could get inside and take photos. He and his wife had not had a chance to take it out once this year, he exclaimed.

What he really wanted to show me, I discovered, was his vast store of tools. They were everywhere, hanging on the walls, laying on equipment, tucked into drawers, tucked in spaces. He pulled unused socket sets out of drawers - one set, two sets, three sets. All unopened. Sets of wrenches, big sets, small sets unique sets. He went to a yard sale yesterday and bought a green toolbox, one of many. His wife said to him "It’s your money and I don’t mind, but why do you keep buying so many tools?" He said, "I don’t know, I just keep buying them." He seemed almost helpless about it. I told him to have someone come in and stick some in a box each week and put them in his auction. He ignored me and kept pulling more and more unopened packages of wrenches, socket sets, and pliers out of drawers and cubbies.

Harold’s father had been an auto mechanic and Harold went to the General Motors school in Massachusetts. He worked for several auto dealers in his lifetime. The first one was a big company in Augusta. However, when the father died, he left. He couldn’t stand the son who was running it. He then worked for a Jeep dealer. Same thing happened, the owner died, and the son took over. He left. The son, who had inherited a Jeep, Mercury and another dealership went through them in a few years and ended up as a janitor. Harold worked for a Syrian in Waterville. He said that a lot of people didn’t like him because he was Syrian. Harold said that he never had a problem with him. He was always good to him. He would let him take a car when Harold wanted to take some time to go on a trip. He said to a colleague one day that the owner certainly had a lot of workers that he let go. He said that he suspected that it would happen to him one day too. The colleague told him that wouldn’t happen because he was the only one who did what the boss asked and did it well. He stayed there until he opened his own shop in Rome Hollow. In the winter he plows the roads for the town of Rome. He owns all his own equipment free and clear. His wife drives the school bus for the town. He runs the auction until the end of October, then he has to start getting ready for the winter.

He says that he got started in the auction business after going to see Bill Mosher at the auction barn in Smithfield. He said, "I can do that." The first week he had 4 people, then 7, then 24 and after that, it just grew. He said he didn’t mind how many came. He enjoyed it. He said that he didn’t have that much stuff this week because it had been so hot, and they hadn’t gone out scouting for stuff.

We got to talking about the auction barn in Smithfield. He said that the land had been sold. The one who owned it had a lot of property that he owned and was quite well off. Trouble is he started messing around with one of the young local girls and his wife got wind of it. She took him for all he had. He tried to make some money by selling marijuana but got caught and has spent some time in jail. This is probably why I didn’t get any response when I mailed him information about the show of the auction barn photos in the Oakland Public Library last summer.

Harold said that the auctioneer was out of jail now. He had been caught once selling stolen goods at the auction as well as DUI (driving under the influence). He said that the auctioneer liked the women especially the young ones. He had tried to start up an auction again recently, but it didn’t work. He did say though that he was a good auctioneer, which he was. He told of how the district attorney was named .... Crook. He was a good friend of Harold’s but evidently didn’t sit too well with the auction owners. They put signs up in their barn saying, “Dirty Crook”. I guess Crook asked them to take them down and they refused. It wasn’t too long after that that the auctioneer ended up in jail. I noticed on the garage door that there was a sign for Crook. Harold said that when they ask to put up a sign he says fine. They ask whether he is a Democrat or Republican. He says, "It doesn’t make any difference. Put up the sign." They can’t understand him.

Addendum
One year when my father, James Downey, came to Maine his car broke down. I don’t remember what the problem was, but it had to be fixed. My father was pretty knowledgeable about cars because he had run a garage for most of his life and had taken apart a Model T Ford when he was 16 years old and put it back together again.

It might have been a weekend and the only garage around which was open was the garage in Rome Hollow. In desperation he went there not knowing what kind of help he would get way out in rural Maine. But the car was easily fixed and on its way much to my father’s delight. He was duly impressed by the knowledge and service he received. It was Harold’s Garage. 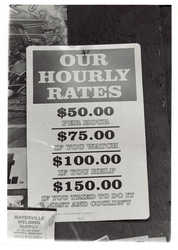 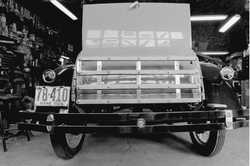 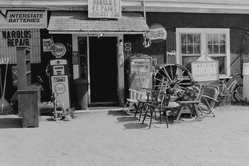 Entry to auction area with chairs lined up for the auction.

Entry to auction area with chairs lined up for the auction.