My father's world - the old farm in Richmond, Maine

My father's world - the old farm in Richmond, Maine

I read many years ago, each person leaves a piece of themselves wherever they visit in the world. I'm not talking about a human footprint or memories or objects that somehow get left behind, I'm talking about parts of their aura (possibly invisible traces of themselves). Somehow that has always bothered me. Leaving parts of myself somewhere else in the world feels like I lost something, but when I think of my family on the Beetle Rd. in Richmond, Maine in the 1950's and 60's, I feel like I've found something. We lived in a very sheltered place with very little interference from anything but local interactions and limited world knowledge. This was a time before my brother and I went off to war and before life got in the way of living. Certainly, things change as we all get older, but that time just seemed special. It certainly was a time of innocence and a time of limited resources, but I just can't remember feeling like anything was really missing. Our family lived in a two bedroom farmhouse with four kids. Me and my older brother shared a bed until I was maybe 12 or 13, but it never seemed uncommon in those days because my cousins around our ages did the same thing. It was simply normal to live with limitations that, in today’s world, would be considered difficult. The only phone, once there was a phone, was a party-line house phone, our TV (which was black & white in the 1950s) could only receive 3 channels and during most days, it was a “test pattern” because regular programming was reserved for the evenings when families would watch together.

My mother and father bought the old farm for $1,000 in the late 1940's that included a house with no indoor plumbing and a no furnace and an old barn on 65 acres of land. The previous owner “Mr. Blood” apparently died in the kitchen of natural causes and had no family. At that time, most of the Beedle Rd. was dirt as was the driveway to the farm house. During the spring mud season and winter, my father would leave his truck parked on the Beedle Rd. about a mile and a half away, where the tar road ended and snowshoe (in the winter) the rest of the way to the house. Apparently, he enjoyed those types of challenges and simply accepted those conditions as normal. At first, my mother considered the old farm “spooky” because she was left most of the days alone and isolated. She didn't drive and my father was working in Gardiner and would leave early in the morning and get back later in the evening. Fortunately, once my older brother was born my mother focused on raising kids and for the first time in her life she had something she could call her own. Her own mother had abandoned her when she was 10 and although her father did the best he could to raise her, they were very poor and she had to basically raise herself. My father was on his own when he was young and spent time as a ward of the state and later lived on the streets of Gardiner and other local towns. They were both looking for a place they could call home.

Me and my brothers (one older and one younger) spent many hours playing outdoors. Toy trucks in the dirt yard, tree forts, snow forts (in the winter), hobbled together wooden carts with old discarded toy wagon wheels. Anything really to occupy our energies and imaginations. It was during these years that I learned to appreciate simple solutions to difficult problems and understood the difference between wanting or needing. We didn't have the distractions of today's world: smart phones, computers, non-stop news - we only had each other. My father was very strict and made sure we understood what hard work was and his word was the final word. I'm sure in today's world he would have been considered a little too rough, especially on us older boys. What I learned from his strictness was discipline and hard work, what I learned from his life was self-reliance, accountability, and determination.

That old farm is not a memory of poverty or hard times or lack of opportunity, it's a memory of a time when life was simple and self-reliance, hard work, and accountability were our measure of success. My father would never ask for help and would have never accepted assistance from anyone, he taught himself what he needed to know and worked hard to support his family. That was my fathers world. 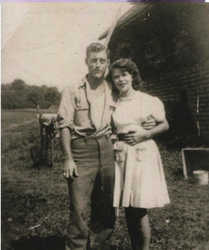 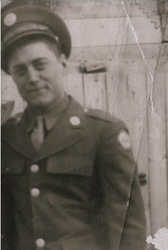 Ariel view of the old farm on the Beedle Rd. Richmond, Maine (around 1964)

Ariel view of the old farm on the Beedle Rd. Richmond, Maine (around 1964)