A Lifelong Romance with Retail

A story by George A Smith 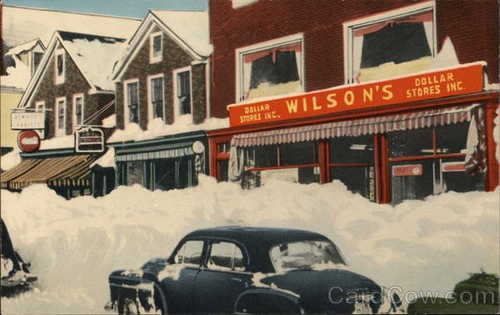 Our shopping future may be in the wide aisles of Wal-Mart, but our past was in the narrow, cluttered aisles of local five and dimes.

When Alfred Senter announced that Senter’s Department Store in Brunswick would close after 83 years of providing Maine people with outstanding service, melancholy settled over me, swept in by my own memories of Wilson’s Dollar Stores, and buffeted by other names like Unobskey’s and Treworgy’s.

The local five-and-dime is dead, buried by the automobile and discount mart. We’ll drive to the new Augusta mall, passing empty stores in our own towns, cursing the lack of serve and congestion at the mall, forgetting our own role in the murder of Senter’s, Wilson’s, and other community retail stores.

I had a romance with retail from a very early age when I stared out in the business by counting inventory at Wilson’s, where my Dad worked his way up from clerk to part owner. Wilson’s was a five-and-dime with everything from shoes to hardware, candy, toys, and more. Wilson’s grew from a single store in Winthrop, founded by my namesake George “Squanto” Wilson, into a chain of stores from Lincoln to Norway, including Auburn, Hallowell, Gardiner, and Livermore Falls. I worked in all the stores at one time or another. It was an incredible education in what is now a by-gone era.

The urban renewal project that left a hole where Wilson’s once stood on Winthrop’s Main Street left an even bigger hole in my heart. The bulldozers and building movers removed my boyhood home where I cooked peanuts, sorted work pants, stacked sneakers, swept floors, and checked out customers.

Oh, the smell of those hot roasted cashews drove this growing youngster crazy! I’m sure I ate up all the profit on those. But it is the customers I remember best.

This was the era when service was more than a slogan. We waited on customers, served them with a smile, and thanked them profusely when they made a purchase. The customer was always right. A lot of visiting went on at the cash register, and I developed a knack for ringing up sales while talking about last night’s basketball game.

I learned a lot about serving customers from Dad, who often rose from bed on Christmas Eve to respond to a frantic call from a father who had neglected to purchase gifts for his kids. Dad would trudge down to the store, open up, and wait on his customer. He never said it, but I always knew that he really did it for the kids.

People flocked to Wilson’s in Winthrop from Readfield, Mount Vernon, Wayne, Monmouth, and the far reaches of Kennebec County. I met people from every state in the Union during the summer months, including some rather famous folks, like pro golfer Bob Rosberg. I am still know hereabouts as Ezra Smith’s kid, by all those customers who knew Dad in the store and appreciated his cheery service.

As I got older, my store assignments grew in responsibility, but I never liked working in the warehouse, delivering goods in the truck, or laboring in other positions that took me away from the retail stores. That connection to the customer was the thing I enjoyed the most. I think about that today whenever I am in line at a big box check out. It is all so impersonal. The clerk doesn’t know me. The programmed response, "Thank you for shopping at …" just isn’t the same.

In these stores, I can’t find someone to wait on me, to save my soul. The peanuts are locked up in cans and the only smell is disinfectant. Everyone’s in a hurry, no more laughing, no more fun. I don’t think it's much fun to work in retail stores today. At least, the employees don’t look to me like they’re having the kind of fun I always had at Wilson's.

Mr. Senter lasted longer than most, and I’m sure he suffered when his store in Brunswick closed. But he could be proud of his store's long record and tradition of customer service.

I don’t know if Maine will have any small retail department stores left at the turn of the century. But I did notice, next to Senters' letter announcing the store's closure in the Kennebec Journal, was an ad for Reny's. The Reny family fights on. Good for them – and for us!