A story by Jamison McAlister from 158 years 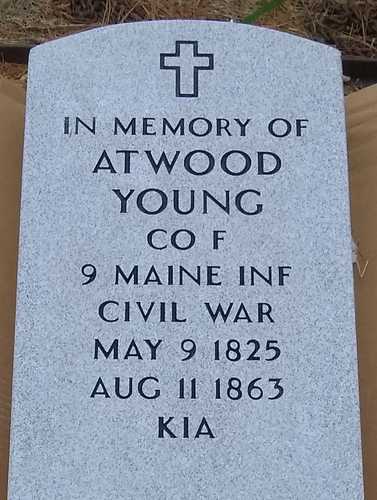 My brother (Philip Jr) and I were excited that the VA approved a head stone for our great, great, great grandfather who died in the Civil War and was buried in a mass grave in South Carolina finally arrived. Ironically the head stone arrived yesterday on 7 December (December 7, 1941, is that date the Japanese attacked the United States Naval Base at Pearl Harbor). My brother is the family historian and deserves all the credit for doing the research. It sets deep in his soul that he finally found out what happened to our Great, Great, Great Grandfather. I’m a Veteran and to bring a Soldier home to rest also sets deep in my soul. Not to mention that he is our Great, Great, Great Grandfather and another ironic twist to this story is his birthday (Month and day) is the same as mine: 9 May.

Most people have seen the movie "Glory" which depicts the story of the African American 54th Massachusetts Infantry Regiment. At the end of the movie, they attack Fort Wagner S.C. You walk away from the movie thinking that it was the only unit that fought that day. In fact, there were five other infantry regiments that also made that attack: 6th Connecticut, 48th New York, 3rd New Hampshire, 76th Pennsylvania and the 9th Maine, with another four regiments in reserve that fought also in the coming days.

In today's military it's easy to get a roll call to account for your Soldiers. Back in those days it took days to find out what happened to your Soldiers. As the story goes: after any battle roll call was called. When someone didn’t answer the Non-Commissioned Officers (Sergeant) would ask did anyone see what happened to so and so. Our Grandfather's name was called "Private Atwood Young", and he did not answer. From the eyewitness account on the documents my bother found a PVT recalled seeing PVT Atwood Young, our Great, Great, Great Grandfather, get hit in the head with a musket ball and falling forward into the trench and he didn’t move. The date of death was confirmed on 11 Aug 1863, 24 days later because that is how long it took for everyone to verify his death and sign the death certificate.

At sunset, the 54th Massachusetts Infantry, and African American infantry, advanced on Fort Wagner for a frontal assault as the naval assault ceased. When the Federal forces were within 150 yards of the fort, the Confederate Commander Taliaferro instructed his soldiers to fire. As they crested the flaming parapet, 6th Connecticut joined the fray. Soldiers of the 48th New York succeeded in following the Connecticut troops up the slopes of the southeast bastion, but few of Strong's remaining units were able to get that far. Three Confederate howitzers had come into action on the flanks of the attacking forces. The deadly hail of canister brought the 3rd New Hampshire, 76th Pennsylvania Zouaves, and 9th Maine to a bloody standstill atop a ridge of sand just beyond Wagner's moat.

As the 100th New York Regiment approached the fort, they mistakenly fired onto the ramparts, trapping several Federals regiments between two sides of gunfire. While several more Federal regiments were able to reach the fort, others were not forthcoming. With a lack of reinforcements, Major Lewis Butler began an evacuation of Federal forces. By 10:30 p.m., the desperate fight for Fort Wagner was over, and the Confederates still held the fort. The Aftermath: UNION 1,515 (246 killed, 880 wounded and 389 missing & captured).

The Union Commander sent an inquiry to the Confederate commander of Fort Wagner, asking about the disposition of the bodies. They replied that the union soldiers were buried in a common grave (Mass grave), trench along the island’s shore, close to the fort. Indeed, this was where all the Union dead were buried on the tiny island. It did not matter the color of there skin, they were Union.

Ironically, by September, the decomposition of the bodies in the trench had begun to contaminate Fort Wagner’s Confederate defenders’ fresh water supply, and Confederates abandoned the fort as a consequence. Union soldiers immediately moved in. Morris Island is smaller than 1,000 acres and is subject to extensive erosion by storm and sea. Much of the previous site of Fort Wagner has been eroded away, including the place where the Union soldiers had been buried. However, by the time this had happened, the soldiers’ remains were no longer there because soon after the end of the Civil War, the Army disinterred and reburied all the remains at the Beaufort National Cemetery in Beaufort, South Carolina, where their gravestones were marked as “unknown.”

Interesting to note through our research if you go to the state of Maine Civil War website it shows you the Civil War Units that have something written about it, but nothing on the 9th Maine Inf. You can find the 9th on the PDF titled: Maine in the war for the Union. In that reading you will notice the Officers family name. These family names are still in the area: Bisbee from Canton, Bisbee from Peru and Blake from Turner. Most of the Young family settled in Paris, West Paris, Norway and Oxford.

Our journey is still not over. We are trying to get a flag issued from the State of Maine, Grand Army of The Republic Veteran Grave Marker, and Civil War Campaign Medal issued from the VA.

At least after 158 years our grandfather can finally come home to rest.