A story by Donald C Cunningham from 1972 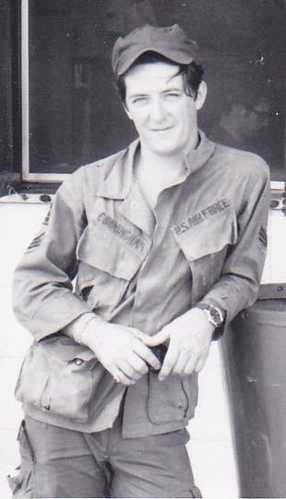 On my last flight home from the South East Asia during the Vietnam War, I was ready to get back to Maine and start my life again as a civilian. I had plans to put my military experiences behind me and start fresh by starting college and planning a new career. It was a long flight back to the states so I had plenty of time to anticipate how great it would be to return after such a long and stressful assignment. I was a Crew Chief on F4E's and there were many hours with little or no sleep and most of what we did was dangerous. I was a crew chief on two planes that were shot down and one of the pilots on my last plane was captured and spent a year in the “Hanoi Hilton” and was released with John McCain in May of 1973. Unfortunately for me, my assignments changed in June of 1972 as well. Perimeter duties, arming bombs, and assignments that were stressful and hazardous. Currently, I have CT Scans at the Togus V.A. every year because I have exposure to asbestos in one lung, possible exposure to Agent Orange in the other lung, and scar tissue from pneumonia as well. I've had two operations on my neck, one of my vocal chords was “accidentally” cut, two spine procedures, and an upcoming biopsy on my bladder. All of which I believe were connected to those last few months before I flew back to the states.

I finally landed at Travis Air Force Base in California (near San Francisco) in Aug. 1972 and they started my separation papers shortly after we arrived. I was being discharged. We had several briefings and meetings/lectures about how things were much different and we needed to prepare ourselves for how we might be received by civilians. We were told that “for our safety”, it would be safer for us if we returned home in civilian clothes and didn't mention that we were just returning from South East Asia and the Vietnam War. It was a bit confusing and as I waited for a civilian bus to transport me to the San Francisco airport, I had my first experience with anti-military anger. A bus arrived and myself and a couple of other guys boarded and took our seats. It wasn't long before we started getting harassed on the trip to the airport, at the airport, and on the plane headed home. People could easily spot a returning GI and San Francisco was the epicentre of anti-military sentiment at that time.

It was great to get back in Maine. Strange thing was, no one asked me how I was or where I'd been, not even my family. I was officially discharged on Aug 20, 1972 and I started at Thomas College in Waterville at the end of Aug. Not much time to get settled in, but I was ready to start something new. My first day at Thomas I met with the guidance counsellor who started reviewing my paperwork and stopped after reading the first form. He leaned forward towards me and almost in a whisper said, don't mention to anyone that you just returned from the military. For the next 40 years I didn't mention anything about that part of my life until my very young daughter started asking questions. I've never joined any organizations like the V.F.W. or AMVETS, not because I regret that experience, but because I got used to suppressing it. Fortunately today its very different. 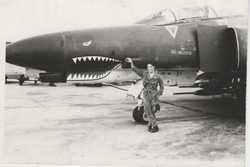 Me with my F4E

Me with my F4E

Sitting on bombs fully loaded on my F4

Sitting on bombs fully loaded on my F4