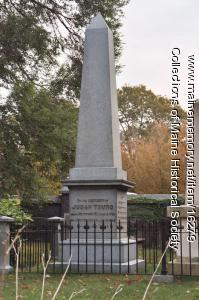 Judah Touro's Memorial in the Cemetery

Longfellow's poem "The Jewish Cemetery at Newport" opens up the issue of the earliest history of the Jews in America, and the significant roles they played as businessmen and later benefactors to the greater community. The history of the building itself is notable in terms of early American architecture, its having been designed, apparently gratis, by the most noted architect of the day. Furthermore, the poem traces the history of Newport as kind of a microcosm of New England commercial cities before the industrialization boom. For almost any age student the poem could be used to open up interest in local cemeteries, which are almost always a wealth of curiousities and history. Longfellow and his friends enjoyed exploring cemeteries, and today our little local cemeteries can be used to teach little local histories and parts of the big picture as well.

Henry Wadsworth Longfellow visited the Jewish cemetery in Newport, RI on July 9, 1852. His popular poem about the site, published two years later, was certainly a sympathetic portrayal of the place and its people. In addition to Victorian romantic musings about the "Hebrews in their graves," Longfellow includes in this poem references to the historic persecution of the Jews, as well as very specific references to their religious practices.

Since the cemetery and the nearby synagogue were restored and protected with an infusion of funding just a couple years after Longfellow's visit, and later a congregation again assembled, his gloomy predictions about the place proved false (never mind the conclusion of the poem, "And the dead nations never rise again!"). Nevertheless, it is a fascinating poem, and an interesting window into the history of the nation's oldest extant synagogue.