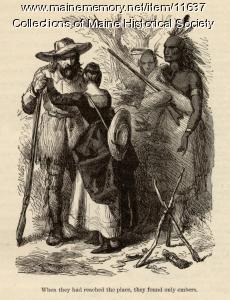 Illustration for 'Evangeline: A Tale of Acadie,' ca. 1880

Throughout the course of history there have been many events in which great suffering was inflicted upon innocent people. The story of the Acadian expulsion is one such event. Britain and France, the two most powerful nations of Europe, were at war off and on throughout the 18th century. North America became a coveted prize for both warring nations. The French Acadians of present day Nova Scotia fell victim to great suffering. Even under an oath of allegiance to England, the Acadians were advised that their families were to be deported and their lands confiscated by the English. This event was immortalized by Henry Wadsworth Longfellow's epic poem "Evangeline", which was published in 1847.