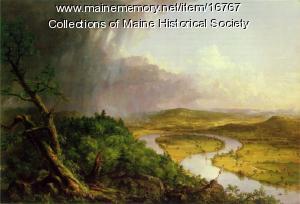 View from Mount Holyoke, Northampton, MA, after a Thunderstorm (The Oxbow)

When European settlers began coming to the wilderness of North America, they did not have a vision that included changing their lifestyle. The plan was to set up self-contained communities where their version of European life could be lived. In the introduction to The Crucible, Arthur Miller even goes as far as saying that the Puritans believed the American forest to be the last stronghold of Satan on this Earth. When Roger Chillingworth shows up in The Scarlet Letter's second chapter, he is welcomed away from life with "the heathen folk" and into "a land where iniquity is searched out, and punished in the sight of rulers and people." In fact, as history's proven, they believed that the continent could be changed to accommodate their interests. Whether their plans were enacted in the name of God, the King, or commerce and economics, the changes always included  and still do to this day - the taming of the geographic, human, and animal environments that were here beforehand.

It seems that this has always been an issue that polarizes people. Some believe that the landscape should be left intact as much as possible while others believe that the world will inevitably move on in the name of progress for the benefit of mankind. In F. Scott Fitzgerald's The Great Gatsby  a book which many feel is one of the best portrayals of our American reality - the narrator, Nick Carraway, looks upon this progress with cynicism when he ends his narrative by pondering the transformation of "the fresh green breast of a new world" that the initial settlers found on the shores of the continent into a modern society that unsettlingly reminds him of something out of a "night scene by El Greco."

Philosophically, the notions of progress, civilization, and scientific advancement are not only entirely subjective, but also rest upon the belief that things are not acceptable as they are. Europeans came here hoping for a better life, and it doesn't seem like we've stopped looking. Again, to quote Fitzgerald, it's the elusive green light and the "orgiastic future" that we've always hoped to find. Our problem has always been our stoic belief system. We cannot seem to find peace in the world either as we've found it or as someone else may have envisioned it. As an example, in Miller's The Crucible, his Judge Danforth says that: "You're either for this court or against this court." He will not allow for alternative perspectives. George W. Bush, in 2002, said that: "You're either for us or against us. There is no middle ground in the war on terror." The frontier -- be it a wilderness of physical, religious, or political nature -- has always frightened Americans.

As it's portrayed in the following bits of literature and artwork, the frontier is a doomed place waiting for white, cultured, Europeans to "fix" it. Anything outside of their society is not just different, but unacceptable. The lesson plan included will introduce a few examples of 19th century portrayal of the American forest as a wilderness that people feel needs to be hesitantly looked upon. Fortunately, though, the forest seems to turn no one away. Nature likes all of its creatures, whether or not the favor is returned.

While I am not providing actual activities and daily plans, the following information can serve as a rather detailed explanation of things which can combine in any fashion you'd like as a group of lessons.

The art section takes approximately one class period.
The time required for the literature section varies, based on whether a teacher wishes to have students study all of the authors and works recommended.