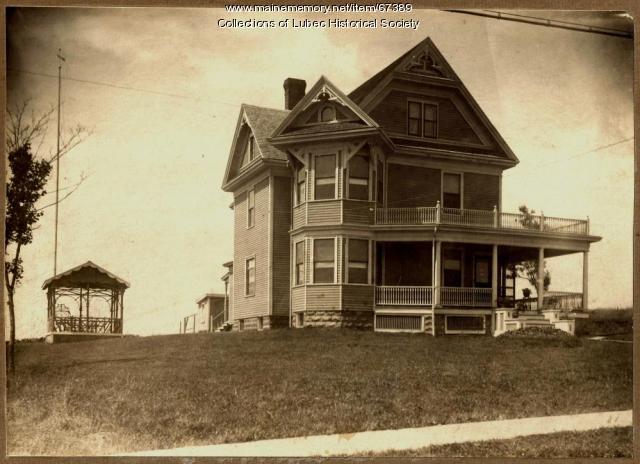 This part Victorian part Arts & Crafts style home, apparently built in the earliest years of the 20th century, was initially home to Charles C. Winton and his family, wife Mabel nee Tarring, and their children Charles C., Jr., J. Elizabeth “Betty,” Henry W., and James H. Winton. Located across Main Street opposite Flatiron Corner, the house was owned by the American Can Company and used by ranking employees on the rise. Winton was a supervisor at the plant.

According to Betty Winton’s grandaughter Debi Ham, the five-bedroom house had bathrooms on both floors, unusual in 1910. The second story included a stairway to maid’s quarters. A floor button in the dining room called for service. There were separate rooms in the basement, one of which stored fruits and vegetables prior to canning. Ms. Ham recalls her grandmother describing great beds of colorful nasturtiums on both sides of the house.

Note the foundation, fabricated with concrete blocks cast to resemble stone, stylish in that era and manufactured locally by “Red” Morrison. This photograph, apparently made professionally, was carefully planned. Note the window shades drawn to matching levels. The rustic pergola no longer exists, nor its weathervane of unusual height.