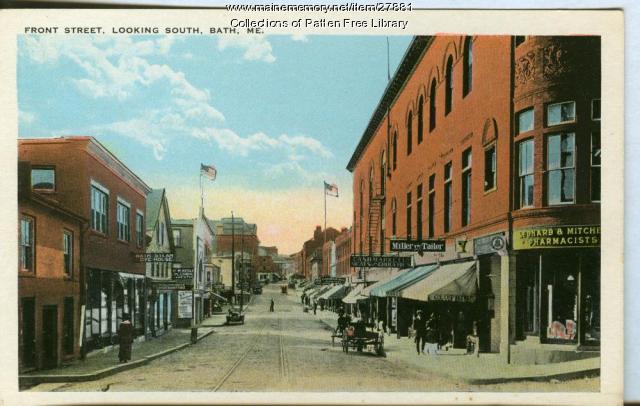 This unused picture postcard from the second decade of the twentieth century shows Front Street, the heart of Bath's central business district, as seen from the northern edge at the intersection of Summer Street.

The large block in the foreground on the west or right-hand side of the street is the Columbian Block, constructed after a massive fire in 1893. This structure, designed by Maine architect John Calvin Stevens, employed aspects of the Richardsonian-Romanesque architectural style in its curved corner, the bands of windows, arched entrances, and terra cotta panels with foliate ornamentation.

Opposite Patten Free Library on Summer street, the Columbian Block and library were the only structures in Bath done in this style.

At that prominent corner stood the drugstore of Leonard & Mitchell. E. Randall Leonard and Harry Mitchell opened the store in 1894, in the new "YMCA" or Columbian Block. Leonard bought out his partner some years later, but continued the business under the name of the partnership until a year before his death in 1930.

Leonard (1863-1930) was a Bath native who attended the local schools and then dropped out two weeks before graduation, to work at the pharmacy of Samuel Anderson, another long-term drugstore. He stayed with that firm until 1893, before a brief stint in a Rockland establishment.

Returning to Bath, he opened his own store with Mitchell, married Mary L. Merrill, and began a family. As was common among the businessmen of the city, Mitchell was active both in city politics and local charitable institutions, serving as an alderman and school-board member, as well as involvement in the Old Folks' Home and the Patten Free Library.

His Bath Daily Times obituary on April 28, 1930 offered an odd clue to an aspect of the time. It was noted that the funeral would be held on "Tuesday afternoon at two, daylight saving time." Although daylight savings time was legislated on the national level during World War I, it was an unpopular law that was repealed.

Also visible in the postcard were the businesses of Miller the Tailor, the Cash Market for meats and groceries of Henry F. Marson, the Bath Steam Dye House run by Charles W. Walsh and Herbert E. Douglass, and the plumbing store of Osgood M. Redlon.