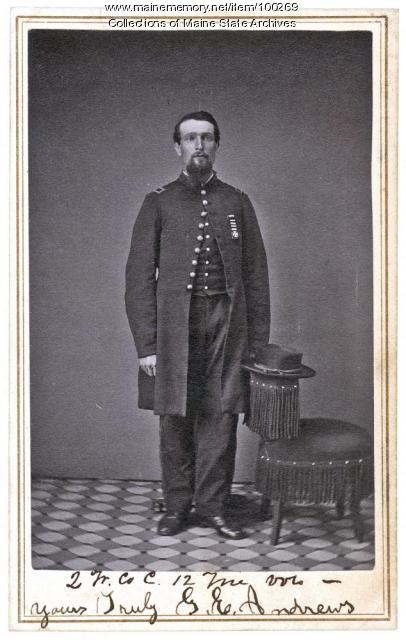 George E. Andrews served as a second lieutenant in the 12th Maine Regiment, Company D, during the Civil War.

Andrews was born in Scarborough around 1832. He mustered into service for the Civil War on November 15, 1861 in Portland for a three year period, elected as first sergeant. Andrews was commissioned a second lieutenant on December 12, 1864. Surviving the war, he mustered out in 1866 and returned home to Maine.

Andrews's unit of the 12th Maine left Portland for Lowell, Massachusetts on November 24th. Shortly after arriving there, they were loaded aboard a transport to Fortress Monroe, Virginia, arriving on January 2, 1862. On February 4th, they were aboard a ship sailing for Ship Island, Louisiana.

Colonel George F. Shepley, commander of the 12th Maine regiment, was appointed Military Governor of Maine and promoted to Brigadier General. He and his regiment, including George Andrews, served in several minor expeditions. They participated in the Teche campaign and took part in the assault and siege of Port Hudson.

In 1864, the 12th Maine regiment was transferred to Virginia. There they joined General Philip Sheridan's army. They participated in several battles in the Shenandoah Valley and experienced heavy losses.

George Andrews, his wife, Frances, and two children settled in Portland where George became a carpenter. Andrews died in Portland on April 13, 1911 and is buried in the Evergreen Cemetery in Portland.