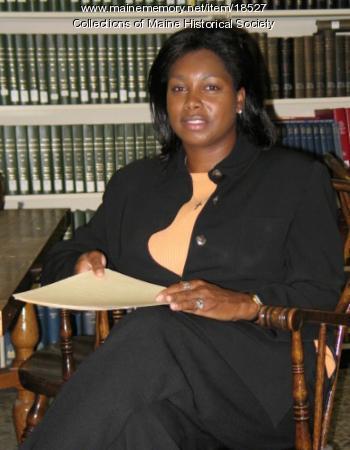 Maureen Elgersman Lee, a former associate professor of history at the University of Southern Maine in Portland, was Faculty Scholar for USM African American Collection of Maine.

She is now the Executive Director of the Black History Museum and Cultural Center of Virginia.

She is a graduate of Redeemer College, Ontario, Canada, and hold master's and doctorate degrees from Clark Atlanta University.

She is the author of Black Bangor: African Americans in a Maine Community, 1880-1950 (December 2005) and
Unyielding Spirits: Black Women and Slavery in Early Canada and Jamaica (1999).

Click on the audio link below to hear Dr. Elgersman Lee's introduction to the Maine and Portland anti-slavery society documents.

Members acknowledged states' rights in slavery legislation, but remained committed to convincing slaveholders that slavery was a crime against humanity and a sin against God. Members deplored insurrection, whether by Blacks or Whites, enslaved or free.

The documents in the Maine Memory Network online album on the Maine Anti-Slavery Society and the Portland Anti-Slavery Society form a diverse collection of materials. The Society's constitutions, letters, and other materials all speak to the breadth of the organizations' sphere of contact, the depth of their convictions, and the challenges to their missions. Anti-slavery work was serious business. With very real economic, political, and social repercussions, it was not for the faint of heart.