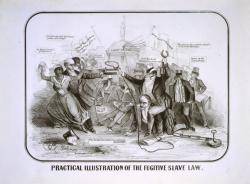 Portland's Anti-Slavery Society, committed to the principles of William Lloyd Garrison, formed, faded, and re-formed in the 1840s and 1850s.

A surviving minutes book that covers 1844-1846 and 1850-1851 details the activities of the group, which was committed to the Garrisonian principle of moral suasion.

The group sought to educate the public by bringing in speakers who could detail the evils of slavery and the religious arguments against slavery, tied into the concepts of American freedom and liberty.

Other antislavery groups also were active in Maine communities, most committed to the same principles.

The leaders of the Portland Anti-Slavery society were well known Portland residents, including Ruth and Peter Morrill, a businessman; Edward R. Place, a bookbinder; Oliver and Lydia Dennett, Nathan Winslow, a merchant; and N.A. Foster, a printer. Samuel Fessenden, a noted lawyer, was active locally and in the state organization.

Remarkably, the group included women as well as men, black residents as well as white. Elizabeth Mountfort was the secretary of the group in the 1850s and her letters to and from prospective speakers as well as the minutes book that she kept provide much of the information about the group.