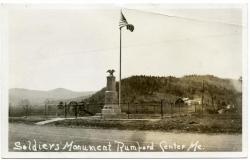 The rural communities of Rumford Center, Rumford Point, and Rumford Corner with a combined population of 1,935, answered President Lincoln’s calls for volunteers by sending 236 men and one woman to the Civil War, according to Len Greaney’s veterans list. These men served in all of the Maine Volunteer regiments. Most were sent to the Army of the Potomac in the mid-Atlantic States.

A significant proportion of Rumford’s soldiers served with the 12th Maine Volunteer Infantry Regiment. This regiment was sometimes called the "lawyers and Democrats" as many of its officers were lawyers or law students -- and a number were Democrats.

The 12th Maine was part of Gen. Benjamin F. Butler’s brigade in Louisiana. The 12th Maine was mustered in at Portland on November 16, 1861 and reached General Butler’s Expeditionary Corps, Department of the Gulf, and New Orleans on May 4, 1862, after spending several months at Ship Island, Mississippi. 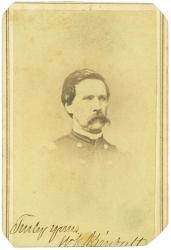 William King Kimball of Rumford Point, who had enlisted as a lieutenant colonel, was promoted to colonel and commander of the 12th Maine in July 1862 when Col. George F. Shepley became military governor of Louisiana.

Kimball was born June 7, 1820, the son of Moses F. and Mary (Bean) Kimball of Rumford Point. He attended Bethel and Bridgton academies, graduated from Harvard Law School, and began a practice in Dixfield.

Kimball moved to Paris in 1844 where he was elected County Attorney, an office he held for four years. He then became Clerk of Courts for ten years, and served as a U.S. Marshal from 1857 to 1861.

He enlisted on November 15, 1861 and spent the next four years in the Department of the Gulf. After his promotion to colonel, Kimball was breveted a brigadier general in March 1865 and became colonel of the 2nd Maine Infantry on April 10, 1865.

Major Gen. Benjamin F. Butler commended King in June 1863 to Secretary of War Edwin M. Stanton, writing, "the news of the brilliant achievement of Lieutenant-Colonel Kimball, of the Twelfth Maine Volunteers, and the brave men under his command, at Manchac Pass was very gratifying to the Department, and it entirely approves your action in allowing the regiment to retain the colors which they had so gallantly taken from the enemy." He also received a commendation in December 1864.

Following his mustering out on April 18, 1866, he returned to Paris Hill. He died by suicide September 2, 1875 and is buried in Rawson Knoll Cemetery in the Rawson family plot.