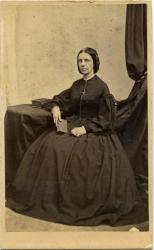 The nearby village of Rumford Center sent the only woman from the region to the Civil War. She was Amanda Cordelia Kimball, born November 20, 1820, the third of 12 children born to David and Lucy W. Wheeler Kimball. An elder sibling, William W. Kimball, founded the Kimball Piano Company. Brig. Gen. William King Kimball of the 12th Maine was a very distant relative.

Kimball lived in Worcester, Massachusetts, with other siblings when the war broke out. What influenced her to decide at age 41 to join the ranks of the many other middle-aged women recruited by Dorothea Dix to serve as nurses is not known, but her role as a nurse is documented in Lynda L. Sudlow’s A Vast Army of Women. Kimball worked at St. Johns’ College Hospital, General Hospital #2, in Annapolis, Maryland.

Amanda Kimball died from typhus on February 14, 1865. An obituary clipped from the local paper read: "To her friends in this city, and to many a soldier languishing in hospitals — or at the front — or in winter quarters — this announcement will bring heartfelt sorrow."

Another nurse there, Mary Fitch, of Erie, Pennsylvania, wrote on April 3, 1889, "…Miss Amanda Kimball whose remains it was my sad duty to convey in a soldier’s coffin to her waiting kindred in Worcester Massachusetts from whence they were taken to her home in Maine." Amanda C. Kimball is buried in the Moses Kimball family plot in Rumford Center Cemetery.

A Rumford area lawyer, George Dana Bisbee, who was born July 8, 1841 in Hartford, served in Co. C of the 16th Maine Infantry. At age 20 he lived in Peru, across the Androscoggin River from Dixfield, where he was a fledging lawyer.

In his personal diary, Bisbee wrote that he enthusiastically signed up when the recruiters arrived in town, on June 17, 1862, and was mustered in as a private in Augusta. He was promoted to full 1st sergeant on August 17, 1862. The enlistment was for a three-year term.

The regiment was immediately sent to Washington, D.C. and had no time to pack necessary clothing and equipment. The items were reportedly not sent in a timely manner and the men were shoeless, hatless, and without overcoats. They were reportedly jeered as "the Blanket Regiment."

George Bisbee distinguished himself and was promoted to full 2nd lieutenant on April 28, 1863. He was wounded at Fredericksburg.

Bisbee was taken prisoner at Gettysburg and sent to Libby Prison in Richmond, Virginia. He was paroled from the prison in December 1864 and was mustered out on June 5, 1865 at Arlington Heights, Virginia.

Bisbee returned to the Androscoggin River area, living in Buckfield, Dixfield, and later Rumford, where he was a partner in the Bisbee & Parker law firm, president of the Rumford Falls Trust Company and a board member of the Mechanics Institute.

George D. Bisbee died on May 16, 1918. He is buried in the Buckfield Village Cemetery.

These few soldiers and one nurse are a small representation of the 237 Rumford area people who volunteered to serve the Union. About 46 died from wounds and disease. The cemeteries in the area have tombstones of ordinary citizens who gave their lives during and after the Civil War, some of whose stories may be lost.

After the war, Rumford and Maine in general lost population. Some farms were left untended, with wives having to move to the villages. Such was the case of Betsy Eaton whose husband, Osgood Eaton Jr. died of disease at Brashear City, Louisiana, and son, Henry, who died of his wounds at the Battle of Cold Harbor, Virginia.

The economy remained, as it had been prior to the war, an agrarian one. Not until Hugh J. Chisholm arrived at the Rumford Falls area in 1882, started paper mills and recruited immigrants did the region recover economically.