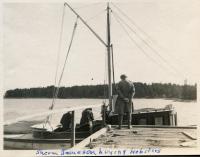 He traveled on the Foster D to many islands and shoreline communities in Musongus Bay to buy lobsters. He held them in a lobster pound on Friendship Long Island until he was ready to sell them. When he took them to his wharf, he measured and weighed them in a big wire basket on a platform scale at the end of the wharf.

The Foster D also served as an extension of the wharf. In the summer many lobsterman and their families lived on islands off the coast of Friendship. Jameson delivered groceries from the store, hardware, animal feed, supplies for lobstering, gas and kerosene, and even mail.

When he picked up lobsters from the islanders, they would give him shopping lists, and he delivered their orders on his return trip.

Captain Archibald kept his word and brought steamboats to Friendship on a regular basis, bringing supplies and passengers to the Jameson & Wotton Wharf.

Steamboats were a significant form of transportation. Roads on the mainland were bumpy and rough, barely fit for traveling. Communities located at the end of long peninsulas were much easier to get to by boat.

William Jameson wrote in his journal, "When the steamer came, the wharf was crowded with people and things to send to Boston or Portland markets. Eggs, poultry, berries, fruits, etc. There was a great excitement and bustle as men with hand carts rushed up and down the gangway with the freight."

He also remembered going up to the pilot house while Jameson talked to Captain Archibald. "All that shiny brass shining, the steam escaping, the wind whistling in the rigging, the flags snapping in the wind, the orange life jackets, the fire axes and extinguishers, the Captain's uniform with the gold braid on the sleeve and hat. It was very impressive to a boy of five or six years old."

The steamboats were an important link to Camp Durrell and Friendship summer  hotels. Camp Durrell was a YMCA camp for boys, located on an island a few miles off the coast of Friendship.

Campers came via the steamboats to the Jameson & Wotton Wharf, and from there they took a launch to the camp. Their parents also took the steamboat to Friendship to visit their sons at the camp. It was a long trip, so they needed to spend the night in Friendship.

There were two major inns within walking distances of the Jameson & Wotton Wharf: the Argyle Inn and The Seaview Hotel. The latter had been purchased by Robert Armstrong in 1899 to accommodate the parents of the campers. Coastal traffic diminished after World War I, causing both hotels to close.

Jameson and Wotton sold the wharf to Charlie and Ida Stenger in 1928. This was  a good time to sell because the steamboat trade was dwindling, as roads to Friendship had improved.

The Stengers closed the store, but kept the lobstering business running. In addition, they opened The Lobster Pot, a popular restaurant that served lobsters, clams, fish, and scallops.

During World War II the Lobster Pot was closed while Charlie Stenger worked at Bath Iron Works, and Ida worked as a registered nurse. Charlie led the town Civil Defense Corps and built an enemy plane spotter booth at the end of the dock. Men and women of the community stood duty twenty-four hours a day but never saw an enemy plane.

After the war the Lobster Pot reopened and remained open until 1956 when the Stengers sold the wharf.

Subsequent owners included Bernard Brow, Robert Wallace, and Harlan Wallace. All of them continued the tradition of commercial lobstering.

In 1997 Harlan Wallace sold the wharf to its current owner, the Friendship Lobster Co-Op, but he still maintained an active role in the wharf as a member of the Co-Op. Because he had many years of experience building and maintaining wharfs, he oversaw an almost complete rebuilding of the wharf.

In 2009 the Co-Op sold its developing rights to the state in return for a grant from the Working Waterfront Access Pilot Program to improve the property. The wharf agreed to abide by a covenant that will protect the wharf as a commercial fishing facility in perpetuity, thereby protecting the tradition of a working waterfront in Friendship. A significant contributor to this tradition was the original Jameson & Wotton Wharf, founded at this site by Sherman Tecumseh Jameson and Walter H. Wotton well over 100 years ago.

Additional Photos of the Wharf

Stenger's Wharf and the Lobster Pot