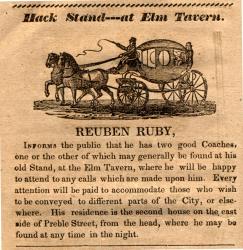 Owning and operating a hack business in Portland gave Reuben Ruby (1798-1878) more than a steady income. It helped propel him into a leadership position in the city's black community.

Reuben was the first hack driver in Maine.

He traveled frequently to New York in conjunction with his work with black anti-slavery societies. In 1832, he drove abolitionist William Lloyd Garrison around Portland and hosted a meeting between Garrison and black leaders.

He was instrumental in forming the Abyssinian Society and the building it constructed on Newbury Street.

Ruby's hack and hack business came in handy in these and other activities. But it also contributed to his becoming known as the foremost conductor of the Underground Railroad in Portland.

Through his business, Ruby could transport men, women and children fleeing slavery to safe locations in the city. Many escaped slaves arrived in Portland via boat or ship and were transported from here to Canada and freedom. The Underground Railroad was especially important after the Fugitive Slave Act of 1850 became law.

Both black and white Portlanders assisted slaves in escaping from the federal marshals charged with returning them to their owners and from unsympathetic residents as well as from emissaries of their owners.