Maine Memory Network
> In Canada During the Civil War 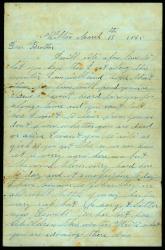 Letter to Francis Pratt from family, 1865

In March 1865, less than a month before General Robert E. Lee's surrender to the Union Army at Appomattox, Virginia, Francis Pratt's mother, sister and brother wrote to him from Wilton about his well-being and the progress of the war.

Pratt (1842-1911) was living in Saint-Jean-Port-Joli, Canada, slightly less than 300 miles from Wilton. No direct evidence suggests that Francis Pratt went to Canada to avoid military service, but that is a possibility, suggested by his brother's comments.

Albert Pratt wrote to his brother, "I may Come there if I am Drafted there is no draft here this time but they have drafted in some of the other towns."

Albert Pratt also wrote, "About my money I want you to get it and keep it for me be shure and get all the intrest."

Clearly, Albert Pratt thought his money would be safer in Canada -- as would his life. His mother and sister did not comment on Albert's portion of the letter. Theirs followed.

Francis' mother, Almira Pratt, wrote, "I hope you will come home this sumer have you ben gon so long that you have forgeten your home."

His sister, Sarah A. Pratt Handley, added an optimistic note, "i hopes that we shall meat again for I think it looks more like peace that it has for a long time."

Francis Cash Pratt, 28, is listed in the 1870 census as living in Wilton with his parents, Elmira and Ezekiel Pratt, and working as a farm laborer, probably on his father's farm.

The letter is only one of two Francis saved or that survived, although it is clear his family wrote other letters to him.

Regardless of why Francis Pratt was in Canada during the Civil War, his brother's comment are an indication that escaping military service by going to Canada was not unheard of in the troubled 1860s.