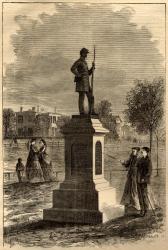 The Civil War, for Maine and much of the young nation, was a defining moment.

Maine is one of several states that claims the most men per capita in the Union Army -- a total of about 70,000 Maine soldiers and sailors served. Ten Maine infantry regiments, a company of sharpshooters, a cavalry regiment, and three batteries from Maine were on the battlefield at Gettysburg.

The Maine regiments were made up of volunteers, who were paid bounties for volunteering; of draftees, also paid a bounty; and of substitutes, paid to take the place of those drafted.

In addition, hundred of of Mainers served as nurses, doctors, relief workers and other non-military positions during the war.

The war affected families across Maine both during the war and in the years following when families continued to cope with injury, lost relatives, and economic effects of the bloody war.

As historian Drew Gilpin Faust wrote in This Republic of Suffering: Death and the American Civil War, the war shaped "enduring national structures and commitments."

Faust argues that one way Americans -- both north and south -- made meaning of the 620,000 soldiers who died was to redefine war as sacrifice and provide memorials and other remembrances of the soldiers and what they had given.

Maine's contribution to the war was large and it followed the national pattern of remembrance.

Cities and towns, large and small, across the state erected monuments to Civil War soldiers. Some were paid for by the Grand Army of the Republic, a veterans' group that was involved in politics as well as lobbying for Decoration Day to honor veterans.

The Bangor monument, dedicated in 1864 to a fallen soldier whose remains were later moved, claims to be the earliest Civil War monument in the country. The Lewiston Soldiers' Monument, erected in 1868, was among the earliest dedicated to the memory of all soldiers.

Many monuments were built in the early years of the 20th century, by which time it was clear that war would define many generations beyond the Civil War.