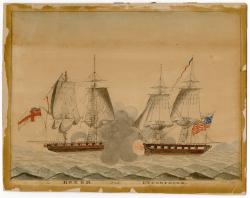 William Burrows, 28, and Samuel Blyth, 29, met on September 5, 1813, captains of enemy ships firing at one another in Muscongus Bay.

Burrows, in command of his first ship, the USS Enterprise, and Samuel Blyth, commander of the British brig HMS Boxer both were hit by cannon fire and died of their injuries.

In life, they were enemies. In death, however, they remain side by side, honored for their bravery and gallantry.

Maine's coastline and proximity to British Canada made the state a target during the War of 1812, as it had during many previous conflicts. 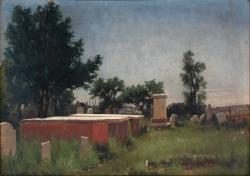 Graves of the Captains, Portland, 1876

On September 5, 1813, the U.S.S. Enterprise, which was patrolling the East coast, chased the English Brig HMS Boxer off the coast of Maine. The British, and especially the Boxer, had been harassing towns along the coast.

While the ships maneuvered for position, the wind died. When it picked up again, the ships moved into into place, and when they were close, they began firing. Residents along the coast could hear the guns and eagerly awaited the outcome.

Blyth was killed quickly, then Burrows was hit. He lived long enough to continue to direct the battle from his position on the deck. The battle lasted about 45 minutes and the Enterprise was victorious. Burrows died after the British surrendered and he was presented with Blyth's sword.

Both ships returned to Portland harbor, where American doctors treated casualties of both nations.

Despite the cries of patriotism and victory that followed the battle, Portland hosted an elaborate funeral on Sept. 9 that honored both fallen commanders. 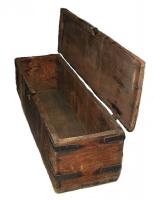 A flag-draped coffin carrying the ship's captain was taken from each vessel and put on a barge, which was then rowed to shore. Guns of salute were fired during the process. The coffins were placed on hearses, which were accompanied by a military escort, two infantry companies and the crew of the Enterprise. Various officials also joined in the funeral procession that went to Second Parish Meetinghouse, where a funeral was held.

With church bells tolling and guns firing, the coffins were buried side by side at the Eastern Cemetery, the opposing captains forever linked.

I remember the sea-fight far away,
How it thundered o'er the tide!
And the dead captains, as they lay
In their graves, o'erlooking the tranquil bay,
Where they in battle died.
And the sound of that mournful song
Goes through me with a thrill:
"A boy's will is the wind's will,
And the thoughts of youth are long, long thoughts."