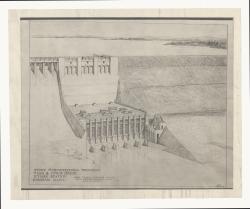 In 1899, electrical engineer Walter Wyman and attorney Harvey Eaton bought a generator and began providing street lighting and service to about 100 customers in the village of Oakland on the upper Kennebec River.

First called the Oakland Electric Company, the concern became Central Maine Power in 1910. At about that time, Wyman began absorbing nearby companies, combining their electrical output, and selling it to downstream textile mills.

Early power companies had served local farm and manufacturing needs, but they were poorly suited for the age of monopoly. Wyman and Eaton understood the need for large firms.

Percival Baxter, first as state representative then as governor, was concerned about the trend of big power companies consuming the smaller ones. He campaigned for a law that would preserve Maine's flowage rights in the public domain, allowing the state to develop its own system of dams and reservoirs. 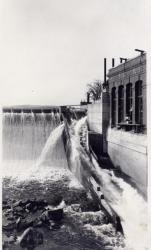 Baxter's campaign culminated in a battle over the Dead River flowage on the upper Kennebec River. The legislature rejected Baxter's plan and sold the rights to CMP.

The Dead River controversy was one of two major political battles shaping up over Maine water powers in the 1920s. The second involved a unique bill championed by Governor Bert M. Fernald and Representative Baxter and passed in 1909 that prohibited export of hydroelectric power generated in the state.

The measure was designed to conserve Maine’s "white gold" for local use and draw new industry in Maine. Baxter noted that "for years Maine had given away franchises, flowage rights, dam rights, eminent domain rights, rights to flow and ... everything else that belonged to the people of this State," and Fernald's law was a first step in ending this practice.

The law was part of Fernald's broad-based conservation agenda, which also included protections for forest, water, wildlife, and fish resources. Opponents of the law, chief among them Walter Wyman, argued that it made little economic sense, but it appealed to those who saw the export ban as a safeguard against monopoly and a means of insuring that Maine would not become a power colony of Massachusetts.

Despite his frustration with the Fernald Law, Wyman continued to expand CMP. To gain capital, he linked his company to a Midwestern utilities empire headed by Samuel Insull, one of the most controversial figures in modern American finance. Using Insull money, CMP absorbed electric companies throughout central Maine and by the late 1920s stood poised to launch most ambitious dam-building project in Maine history.

The Wyman Dam at Bingham, begun in 1928, would be the largest dam in the eastern United States, promising far more power than Maine industries alone could consume.

The paper industry was expanding, but most paper mills generated their own power, and the textile industry, the other potential industrial consumer, was faltering under the pressure of southern competition. In order to shore up his consumer base, Wyman bought controlling shares in Maine’s largest cotton textile mills and he began renovating their decades-old power systems.

Wyman's intervention in the textile industry was timely. Since the early 1920s Lewiston's mills had been struggling to compete against southern mills built near sources of cotton and cheap labor. 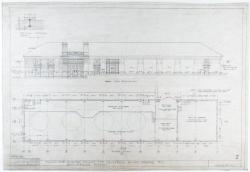 Nearly 70 years old, New England's mills were burdened with obsolete equipment, high transport costs, and inflexible multi-story downtown buildings. Having lost their sense of risk, owners ignored the shift to electricity that invigorated the rest of American industry and relied on water turbines built in the 1850s to transmit energy through a cumbersome system of belts, pulleys, gears, and shafts.

Wyman purchased the mills and their waterpower privileges. He converted the latter to produce hydroelectricity, and sold this power back to the mills. Lewiston’s Androscoggin Mill became one of the largest producers of rayon in the country, and the Bates mill specialized in tablecloths, luncheon sets, and bedspreads. Others remained marginally profitable, but more important they consumed CMP’s surplus electric power.

In 1929 Walter Wyman stood in the midst of the most massive dam project in Maine's history, but he promised to continue the project only if the Fernald law were repealed. Maine should remove the ban on exporting energy, he felt, because growth in the modern economy required large-scale industrial development, possible only if Maine thought in regional, as opposed to insular terms.

But rural people countered with a more traditional vision. Rather than feed the huge mills in Lewiston and fill the bank vaults in Boston, power would be used to reinvigorate their small upland processing centers. In a state with a 200-year history of resource monopoly by land speculators and timber barons, Wyman’s argument struck a discordant note.

After intense lobbying by power interests, in 1929 the legislature called for a statewide referendum on repeal of the Fernald Law. Governor Ralph O. Brewster supported the Fernald Law, but a number of its erstwhile friends, including ex-governor Baxter and Governor William Tudor Gardiner, campaigned for repeal.

Backed by the Gannett newspaper chain, Wyman offered to invest $150 million in Maine industry if the state revoked the law. Although the vote was close in urban areas, the countryside turned it down decisively, and the repeal proposal failed in the September referendum.

With no recourse for selling power outside Maine, CMP underwrote Bath Iron Works, Keyes Fiber in Waterville, and the Crosset Shoe Company in Auburn, and built the Maine Seaboard Paper Company in Bucksport in 1930 – at a location with no waterpower of its own.

The Fernald Law remained on the books until the 1950s when coal-fired generators and proposals for dams on Passamaquoddy Bay and the St. John River made the prohibition on exports impractical and unnecessary.

Wyman saw the Fernald Law and the failed repeal attempt as a classic tale of reaction versus modernity. It was indeed this, but it was also a tale of "two Maines" struggling to reconcile competing visions of the "Way Life Should Be."

Maine clung to the Fernald Law because it resonated with a powerful image of Maine as a small-town society.

The 20th century brought massive structural shifts that wiped out much of this traditional economy, but even in the 21st century the shadow of this older way of life falls across the state, in terms of a fierce attachment to locality, an ambivalence about modernity, and an acute sense of loss, as well as gain, that comes with progress. While it is easy to dismiss this as reactionary, these tensions are really far more complex.