Working Women of the Old Port 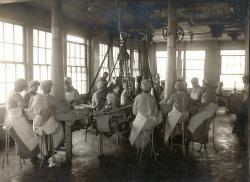 Working Women of the Old Port

By the end of the 19th and beginning of the 20th centuries, increasing numbers of women worked outside the home for pay, in jobs that ranged from dirty, hot, and dangerous factory work, to teaching school or owning one's own business.

In Portland at the turn of the century, the streets were likely teeming with women, some of whom were shopping in the city's large department stores or other shops and others who were traveling to and from work.

The Maine Bureau of Industrial and Labor Statistics was interested in the phenomenon and ordered several surveys to find out what the women and girls were going and something about their working conditions.

The numbers continued to increase as the decades passed.

Many of the working women were young, often in their 20s or younger. Most left the workforce when they married, but some married women continued to work outside the home, often out of necessity to support families.

Many women also remained single and remained in the workforce throughout their lives.

The Bureau of Industrial and Labor Statistics was concerned with such issues . Did the women earn enough? What were the working conditions like?

For the women themselves, those issues certainly were important. Also significant, though, were other concerns: independence, self-expression, social contacts, and, for some, possibilities for advancement.

This exhibit is based on "Working Women of the Old Port: A Portland Women's History Trail," a self-guided trail of sites in the Old Port section of Portland. It is one of a number of such trails developed by the Portland Women's History Trail in conjunction with the University of Southern Maine Department of History. Research and writing for the trail were done by Polly Welts Kaufman, Eileen Eagan, Patricia Finn and Candace Kanes