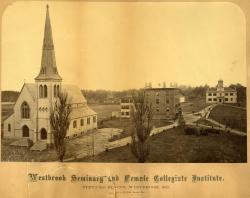 When the Kennebec Association of Universalists founded Westbrook Seminary in 1831, education in Maine, especially for girls, was far from universal.

Many towns had funded schools and schoolmasters starting in the eighteenth century and some two dozen private academies had been organized by 1820 when Maine became a state.

Still, many youths did not go to school at all, and many others attended sporadically. Even by 1855, when school attendance was mandatory, schools generally were in session only about 20 weeks a year and about half the eligible students attended.

Westbrook Seminary was among the first institutions in the state to offer higher learning to female students, although it served both males and females.

It was organized for the “purpose of promoting piety and morality, and for the education of youth in such of the elementary and higher branches of learning as the Board of Trustees . . . shall direct.”

When the first term of classes began in June 1834, in the newly constructed Seminary Building, “youth” was all-inclusive, and males and females were “admitted to equal privileges.”

In 1863 the state of Maine gave Westbrook Seminary the right to offer “a course of study for young ladies equivalent to that of any female college in New England” with “degrees that are generally granted by female colleges.” Young women completing such studies were granted two special degrees, the L.L.L., or Lady of Liberal Learning, and the L.E.L., Lady of English Learning.

Within two years these became the Laureate degree.

In the 20th century, the institution moved from coeducational seminary to girls’ school, to junior college for women, to college, and finally in 1996 it merged with the University of New England, all under the school’s original 1831 charter.

Zelia A. Lunt of Westbrook, who attended the Seminary from 1843-1846, kept a diary during those years that illuminates her experiences.

Julia S. Quinby, who enrolled at age 14, was one of the first two students to earn a degree from Westbrook Seminary.

Helen F. Spaulding, came from Massachusetts to attend Westbrook Seminary, where she prepared to be a teacher. She headed the school's Woman's Department for six years.

Alice Ricker attended Westbrook from ages 14 to 17, taking a college preparatory course. She continued her education at Smith College.

Zelia Lunt started her diary at age 17, about the time she entered Westbrook Seminary. She wrote about her studies as well as visits with families and friends.