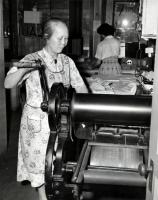 When Toy Len Goon came to Maine from China in 1921 with her new husband, she was pregnant, could not not speak English, and did not know what her future might be like.

Dogan Goon had been in the United States since he was about 18. He had learned English, probably at a church Sunday School that taught the language to Chinese immigrants. He was drafted and served in World War I.

Then he opened a laundry on Forest Avenue in Portland, which he left under the care of a friend, when he when back to China to marry Toy Len.

Together, they worked in the laundry and had eight children -- five boys and three girls.

Dogan Goon died in 1941. The children were ages 3 to 16 and Toy Len Goon was alone. She was determined to keep the laundry going, raise the children, and insure that they all got educations.

The children helped in the laundry when they weren't in school and the older ones traded off going to college and staying home to help their mother and siblings.

In 1952, a family friend, Clara L. Soule, former elementary supervisor and director of reading at Portland Public Schools, nominated Toy Len Goon as Maine's mother of the year. She was selected.

Then, her name went to the national contest run by American Mothers Committee of the Golden Rule Foundation. Toy Len Goon, who had been lived in the U.S. for 31 years, became the 1952 mother of the year.

Her selection was celebrated in Maine, Boston, New York and Washington.

On May 6, 1952, she attended a luncheon at the Waldorf Astoria Hotel in New York, hosted by the American Mothers Committee.

On May 11, she returned to New York for a parade through Chinatown, greeted by a crowd estimated at 2,000. On May 14, she had lunch at the dining room of the Speaker of the House of Representatives. She visited the White House and met First Lady Bess Truman.

Later in May and in June, she was honored in Boston and at several events in Portland.

An editorial in the Boston Herald on May 26, 1952, stated that Mrs. Goon was "typical of the best meaning of the word mother and of the wonderful family tradition in Chinese Culture."

Her dream of having her children educated and married with families came true, too. Five years after her honor, a newspaper article noted that her son Carroll was a physician, Richard a businessman, Edward a research chemist, Albert a lawyer, Josephine a mother, Arthur, a Navy veteran, studying electrical engineering; Doris a court reporter and Janet a college student.

Shortly after receiving the award, Toy Len Goon moved to Lynn, Massachusetts, to be closer to her children, most of whom had already left Portland.