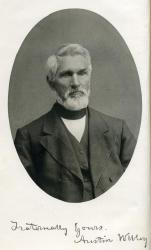 Maine's organized anti-slavery efforts began in 1833 with the formation of the first Maine Anti-Slavery Society, which followed the William Lloyd Garrison approach of immediate abolition and moral suasion.

Despite the Garrisonian rejection of political action to stop slavery, some of the Anti-Slavery Society leaders did support political parties and their efforts as did some other Mainers who opposed slavery. They worked through the Liberty, Free Soil and Free Democratic parties.

But Maine as a whole was ambivalent about abolitionism. The Anti-Slavery societies generally did not receive broad support from the press or the public. The groups sought to educate the public and rouse interest in their cause through lectures from notable abolitionists, meetings, and traveling agents.

The response often was unenthusiastic. Austin Willey, an agent for the Liberty Party and later editor of anti-slavery newspapers in the state, met considerable resistance when he traveled around to speak about the evils of slavery. In some communities, no one wanted to provide him housing. In others, he was refused a meeting place and faced angry crowds.

But the lack of response did not deter the anti-slavery advocates. The Portland Anti-Slavery Society, revived in 1850 after several earlier efforts, had an ambitious program of speakers and activities, including support of a mission in Canada that took in fugitive slaves.

The Portland group had black and white members, men and women, somewhat unusual for an anti-slavery society, most of which had separate men's and women's groups.

The reasons for Maine's ambivalence are many. One obstacle to gaining support was economic. Maine relied on shipping, especially along the east coast and into the West Indies. Ships from Maine did business with concerns that relied on slave labor. Cotton mills in Biddeford and Saco, Lewiston, and Waterville bought cotton grown by slaves on Southern plantations.

Churches and other organizations with national bodies often were reluctant to denounce slavery and, hence, their Southern members. Therefore, many Maine churches declined to get involved in the abolitionist movement.

In 1844, the Portland Anti-Slavery Society minutes noted that efforts to find a church willing to host its lectures had turned up only one church for one evening: the Baptist Church on Free Street.

Even the City of Portland was reluctant to let the Anti-Slavery Society used public facilities at City Hall. In 1844, people were assembled at City Hall for a meeting, then turned away because "there were some speakers present of whom no mention had been made to the mayor." The city passed a resolution that the group not be permitted to use city facilities in the future, because William Lloyd Garrison and other speakers "have been known to use the language the most vile and abusive of our best men and our best institutions."

The group again requested the use of city facilities in 1850 when it became active again and invited speakers to talk about slavery. It held Lyceum lectures at least through 1851 and reported no problems in securing meeting locations.

Other groups besides the Anti-Slavery societies in various communities also advocated for the abolitionist cause. Religious Antislavery Conventions that began in about 1844 urged churches to support the cause, providing religious arguments against slavery. Some of the same people who were involved in the Maine and local Anti-Slavery Societies worked with the Religious Antislavery Conventions.

Samuel Fessenden of Portland, speaking in 1845, said, "are slave laws binding upon us, or are they void as opposed to the Law of God, and to the principles of eternal justice?" He urged participants to obey God, which might include protecting fugitive slaves. 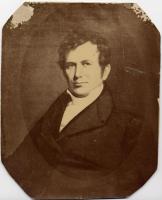 Elijah Parish Lovejoy (1802-1837), a native of Albion and graduate of Waterville College, advocated against slavery in a newspaper he published in Alton, Illinois. His printing press was thrown in the Mississippi River and, in November 1837, while he and supporters were installing new presses, a mob that gathered tried to set fire to the building and ultimately destroyed the press and shot Lovejoy and others.

Lovejoy became known as a martyr to the cause of abolition. Maine abolitionists certainly knew about his efforts and his death and probably were inspired by them. Lovejoy's brother, The Rev. Joseph C. Lovejoy, who lived in Massachusetts, frequently came to Maine to support the antislavery cause here.

Support of slavery -- or lack of support for anti-slavery took many forms. In 1855, a section of Biddeford became known as "Nebraska." The 1854 Kansas-Nebraska Act that Congress passed repealed the Missouri Compromise and allowed people in Kansas and Nebraska to decide for themselves whether to allow slavery.

Maine Democrats split into "Nebraska" and "anti-Nebraska" factions, the former supporting the spread of slavery and the latter opposing it.

Several residents of an area in Biddeford were reportedly quite outspoken in their support of the pro-slavery Nebraska faction. A man advertised in a Biddeford newspaper in 1854 that he wanted to sell his house to emigrate to "Nebraska," referring to the neighborhood in Biddeford. The name of the area stuck.

Portland's Anti-Slavery Society, which was active in the 1840s and 1850s, worked to educate the public about the evils of slavery and the need for immediate abolition.