Biddeford, Saco and the Textile Industry 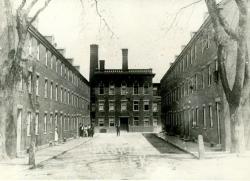 Industry came early to Saco and Biddeford. The waterpower of the Saco River at the two cities lured a sawmill and iron forge in 1653.

Lumbering took off, with some 17 sawmills by 1800. Manufacturing began in 1811 when Colonel Thomas Cutts established the Saco Iron Works on Factory Island.

Metalworkers at the Iron Works used power machines to produce 3,500 pounds of nails per day.

The two cities began a long legacy of cotton manufacturing in 1825 when Saco Manufacturing built the largest textile mill in the country.

The story of the industrial rise and decline of Biddeford and Saco is one of manufacturing statistics and entrepreneurial successes. But it also is a story of the workers whose skill and knowledge helped build the industries -- and of the cultural and social growth of the cities on the Saco River.

Biddeford and Saco grew from small towns to booming urban areas. Daughters of Yankee farmers made up the first wave of mill employees. The mills made efforts -- not always successful -- to protect them and insure their good behavior. Nevertheless, the large numbers of young women essentially alone in newly urbanized areas created hazards for the women and concerns for the community.

By the middle of the nineteenth century, immigrants had started arriving from around the world, drawn by the jobs at the mills and related opportunities.

The mills and the services, industries, and culture that arose around them provide an important part of the history of the two communities.

By Marie O'Brien and Camille Smalley
As textile manufacturing boomed in Biddeford and Saco, the two cities grew, bringing immigrants, new commercial establishments, and new social and cultural institutions to the area.

By Renee DesRoberts
The process of making cloth relied on technology and machinery -- but equally important were the skill and knowledge of the mill's employees. Shown here is the process in the early 1920s at the Pepperell Mills in Biddeford.

The Murder of Mary Bean

When Berengera Caswell died after an abortion in Biddeford in 1849, the story of the factory girl known as Mary Bean became a sensationalized morality tale about the dangers of women away from home and in the workplace.