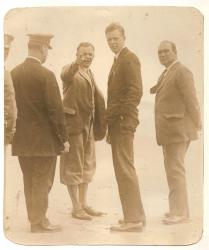 "His face was delightfully ordinary, just a clean-cut average western boy's face. He might have been working in a hayfield or running a tractor," Elise Fellows White wrote of seeing Charles Lindbergh in Old Orchard Beach on July 25, 1927, only two months after his historic solo flight across the Atlantic. 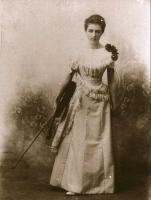 White was a native of Skowhegan and noted violinist in her youth. She had married Bruce White, who was involved in mining, and lived for a number of years in British Columbia and the Pacific northwest. She returned to Skowhegan in 1907 and had moved to Portland in 1925.

Like many others, White was entranced with Lindbergh and with airplanes. She kept a scrapbook of clippings about airplanes and feats accomplished by pilots.

She had hoped to see Lindbergh when he circled Portland for several hours on July 23, but did not. The famed pilot could not land because of fog, and returned to Concord, New Hampshire.

On July 24, Lindbergh tried again to land in Portland, circled for about an hour and a half, and then landed in Old Orchard Beach. He went by car to Portland to speak at Deering Oaks Park.

White wrote in her diary, "I was late for that because I was cleaning the kitchen. It was a hot day and I was not feeling well.

"I started out bravely and walked as far as the Eastland Hotel where three policemen told me that he had gone to bed and would not appear again," White continued.

She wrote that she went home and cried because she was disappointed, but vowed to see Lindbergh. The famed pilot was beginning a three-month tour of the United States funded by Harry and Daniel Guggenheim.

Elise White wrote that the newspaper advised against going to Old Orchard Beach to see Lindbergh's departure. Nevertheless, she arose early, tried unsuccessfully to get her 20-year-old son, James, to drive her, and ended up taking the train.

She wrote, "At Old Orchard the taxi man said the plane was in the hangar on the beach and 'the door is wide open.' Sure enough, it was! I found myself transported from the other place straight to heaven."

White continued, "The little silver plane looked out from its place of refuge, and I could read the 'Spirit of St. Louis' and watch groups of people in front of it being photographed.

"I made a dash under the ropes and laid my hand on the shining tip of one of the wings."

She reports that the crowd grew larger and soon an automobile arrived "with a boy sitting high, his hair blown by the wind, and we saw Lindbergh!" He went into the hangar, then came out to discuss "serious business" with several other men.

She wrote, "He never looked at the crowd nor did he betray the slightest consciousness of an audience. he stood looking out to sea, the surf tumbling in cool green rollers at his feet and the wind blowing his hair.

"He picked up a handful of seaweed and tossed it into the air to show the direction of the wind, then walked slowly back to the hangar.

"It was over an hour before he ceased tinkering with the plane in the darkness of the hangar, and then I saw him signing autographs on the rear of it."

She wrote that he had to wait for low tide and for the sand to harden before he could take off for his next stop. The police officers tried to move the crowd away.

"Finally," White wrote, "Lindbergh snatched a megaphone and shouted through it, but the people surged not away from, but toward him until he threw the megaphone down in disgust."

Lindbergh got the propeller moving. "Brr -- a roar, a blur. He climbed in. It moved smoothly over the sand and in no distance at all -- hardly more than a hundred yards -- it was in the air. He tipped and banked and turned swooping low over the beach then rose like a silver winged bird against the blue sky."

White watched until the plane was gone from sight, and made no further comments about the experience in her diary.