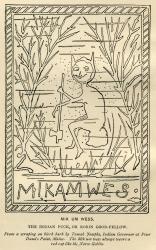 Creation and other cultural tales are important to framing a culture's beliefs and values -- and passing those on.

The Wabanaki -- Maliseet, Micmac, Passamaquoddy and Penobscot -- Indians of Maine and Nova Scotia tell stories of a cultural hero/creator, a giant who lived among them and who promised to return.

Gluskap, also known as Glooskap, Gluskabe, Gluscabi, Koluscap, among other spellings, created the Indians and animals and taught them skills they need to learn to survive.

The stories or legends have been passed down orally through uncountable generations, changed somewhat with each telling.

In the nineteenth century, Euro-Americans sought to record some of these stories and, in some cases, influenced the content and the way the stories were told. Charles Leland, one of the early publishers of Gluskap stories, even drew his own versions of illustrations based on those by Passamaquoddy artist Tomah Joseph.

Regardless of the changes and the Euro-American and Christian influences, the stories retain the same message: humans and animals are related and are responsible to one another and to the earth around them. Gluskap's people should treat every living thing and the earth with respect.