"What greater bliss than to look back on days spent in usefulness, in doing good to those around us."
Dorothea Dix 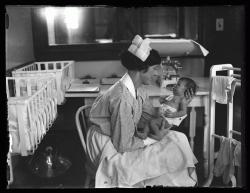 Throughout Maine’s history, individuals have worked to improve and expand medical care, not only for the health of those living in Maine, but for many around the world who need care and help.

While medical technology and skills have changed over the years, the one constant has been the commitment to care, to help those who are ill or need assistance, in order to improve life for all.

Eastern Maine Medical Center first opened in 1892 as Bangor General Hospital. Despite having only one operating room, the new hospital treated 150 people during its first year.

Organized medical wards for men and women remained constantly busy and by 1902 the need for a children’s ward was apparent. Through private and state funding sources, the hospital grew over the years, expanding with new wards, adding several buildings, operating a nursing school, and acquiring the latest technology to improve care of more patients.

In 1951, the Maine Eye and Ear Infirmary, Children's Hospital, Brighton Medical Center, and Maine General Hospital merged to form the Maine Medical Center. In 2019, it is the state’s largest medical center, housing 637 beds and employing around 7,000 people.

The organization began in February 1868, when the State of Maine passed “An Act to incorporate the Maine General Hospital.” Most of the nursing care was provided by students of the Maine General Hospital Training School for Nurses, which graduated its first class in 1887. Electricity replaced kerosene in 1892, though surgeons still preferred using natural light whenever possible.

The 1920s and 1930s were a time for considerable expansion at Maine General Hospital. New medical and surgical services were offered and a clinic opened on India Street to care for patients. The hospital rapidly outgrew the original facility.