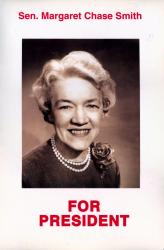 Margaret Chase Smith (1897-1995) of Skowhegan had an independent streak.

As a young woman, she taught school briefly, worked as a telephone operator, worked in the circulation department of a local newspaper, and was an executive at a textile mill. She was active in the Skowhegan and Maine Business and Professional Women's Clubs.

When she got involved in politics through her husband, Clyde Smith, her independence again shone through. He was serving in the U.S. House of Representatives when he died in 1940. Margaret Chase Smith replaced him and served eight years in the House before being elected to the U.S. Senate in 1948 – the first woman elected to the Senate in her own right and the first woman to serve in both houses of Congress.

Her political independence shone through when she challenged fellow Republican Sen. Joseph McCarthy because she believed his anticommunism crusade had gone too far.

Smith was popular in Maine, elected repeatedly by large margins, and influential in Washington, serving on the Armed Services, Aeronautical and Space, and Appropriations committees.

When she ran for the Republican nomination for President in 1964, she made history – and stuck to her principles, running an unorthodox campaign.

Margaret Chase Smith of Skowhegan campaigned briefly in New Hampshire and Illinois before going to the Republican National Convention in San Francisco in July 1964.