The men in this picture are pushing the logs away from the side of the river to the middle so that the logs can flow smoothly down the river.

I became interested in the Kennebec River log drive when my grandfather would tell me stories. He remembers watching the logs flow down the river from his home in Fairfield, a small town along the Kennebec River.

This picture shows logs that were just cut in the woods. Later they were hauled to the river and from there, logdrivers worked to get them to the mills.

I learned that people began floating logs down the river early in the 1800s. The first settlers in Old Canaan (former name for Skowhegan) cut the trees on their farms to build log cabins and barns. After about thirty years, they started to run out of trees in this area, so they had to cut the trees up the river and float them down river to Skowhegan. They built sawmills on the Skowhegan island in order to saw lumber to build the houses in Skowhegan village. Later they built pulp and paper mills up and down the Kennebec river, and began to cut pulpwood for making paper.

After awhile, as trees became scarce, loggers went farther up north to find more trees to cut for the paper mills. By the 1900's, logs were being floated all the way from Moosehead Lake, and from all of the streams that ran into it.

Bill McLaughlin, who worked on the Kennebec log drive, told the story about a man named Aimee Gallant who was working on the log drive and fell off the dam in Skowhegan. Later when the log drivers were working in Fairfield, they saw a body floating and they discovered that it was in fact Gallant. The Foreman, Buster Violette, took his wedding ring and gave it to his wife. David Calder who worked on the drive as a young man, wrote a song about the last Kennebec log drive and about the time the log drivers found Gallant's body.

The last log drive was in 1976. It was held on the Kennebec River and it was a time to be remembered. Some men think that it is too bad that the log drive had to end. It was a time men looked forward to. The pay wasn't good, but they felt it was nice to be on the river, working with their hands. Other men say that it was good that the log drive ended because it polluted the river and no recreation could take place when the logs were floating down.

Log drivers rode on bateauxs to get to the middle so they could rig booms to hold the wood back.

It was late in the year of seventy three
It rained for days, it rained for nights
and then the mercury
plunged like a stone
and the rain turned to ice
Willy Gallant, he went off the dam
and the river took his life

Logs flowed swiftly down the Kennebec falls on the North Channel.

They searched for days along the shore
the eddies and the lees
from the dam in Skowhegan
all the way down to the sea
not a trace did they find
no sign of poor Willy
then the river froze, the wind it rose
and winter laid its siege 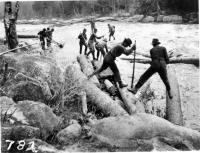 Log drivers used poles called cantdogs to push and roll the logs away from the side. They also used pick poles.