"Canalmen" are cutting ice on the Kennebec River. Most of it was sent to New York. The workers planed the ice to get the dirt off, before they stored the ice.

Ice Harvesting on the Kennebec River. Several million tons of ice, could be harvested in a few weeks. These men are using a stream driven elevator to scoop up the ice blocks.

In the nineteenth century ice harvesting became popular in Maine. In the early 1800's the first ice shipped out from Bath, Maine. This was the beginning of ice harvesting. Then in the later 1820's the first ice house was built in Richmond, Maine. Approximately 40 years later James L. Cheeseman gathered roughly 30,000 tons of ice. In 1886 the Kennebec River topped the million ton on ice production. The great blocks from the Kennebec were actually called the "Kennebec Diamonds."

The question that we asked at the meeting was... if the voters of Skowhegan turn down the proposed bypass at the upcoming referendum, can the government using eminent domain, still continue on with the project? This question made the speaker obviously uncomfortable, so he passed it on to another, and after pondering and talking around the question for a good half minute, a listener asked for a simple "yes" or "no", the answer was "yes".

We interviewed a member of the planning board, and an outraged citizen/ landowner,and a businessman to find their views on the building of this bypass,"or, as John Youney, town planner, likes to call it, the "second bridge." We discovered that the concept of the bypass has been discussed and researched for over seven years; and it has been deliberated by the planning board as to where it should be located.

People located around the world relied on Skowhegan ice harvesting. This gave local fisherman, and farmers a winter activity, while it gave the housewives a opportunity to board workers. This was a difficult process, because it was backbreaking and below 30 degrees.

The process was: the workers would wait for the water to freeze, it had to be hard enough and at least 2 feet thick. This ice was thick and frozen hard enough so that they could stand on it.

They would use ice saws to cut the ice loose. Ice poles and ice tongs, were used to push the blocks of ice to a conveyor belt that carried the ice into the ice house. In some places horses were used to pull what was called a scoring machine, which was used instead of an ice saw. 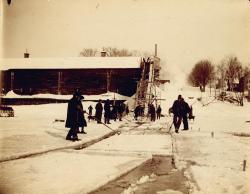 View More Images from this Exhibit