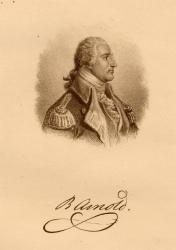 Sir Benedict Arnold was a Colonel in the American Revoluntionary Army and he led an expedition through Maine to the British occupied Quebec City, Canada. Even though he is known in history as a traitor, in reality he was a great patriotic man for America but was lied to by his wife. The Continental Congress, he felt, didn't treat him very well. Many other officers in the army were jealous of his success, and his flambouyant attitude angered them. He was at times, ridiculed,disliked by them. George Washington had great respect for Arnold when he assigned him the position to lead the soldiers to Quebec. Later Arnold switched sides to the British. He lived in London until he died, and he ended up being rather despised by both sides.

It must have been Benedict Arnold's finest moment, when he and all of his one thousand, one hundred soldiers marched through Maine, their spirits high and their guns ready, as if waiting for a fight. However, Benedict Arnold had many troubles on his long march to face the British in Quebec, due to the fact that they started out in the Fall, and because of the cold weather that followed, many men died of diseases.

Right here in Skowhegan they had quite a time and their journals reflect this. They had difficulty navigating the Kennebec River with the heavy bateaux, and their provisions were often destroyed as a result. Soldier desertion, led by Colonel Enos resulted in depleted forces and supplies. The panic of the deserting forces was fueled by Enos's negative influence; he convinced the soldiers that the march would be too hard for them to complete. Even though he is viewed as a traitor today, he fought bravely in 1775 and all of his men respected him for his great leadership.

Benedict Arnold arrived at Fort Western (Augusta ME) in September 1775 where the Continental Army spent their last comfortable day. They left Fort Western and headed north to Quebec, where they would run into more than they had bargained for.

Benedict Arnold arrived in Skowhegan on October 4th, 1775, and it was here that Arnold received his first offer of help from the colonists. Joseph Weston and his sons helped Benedict Arnold and his army cross over the Skowhegan Falls, but Joseph later got a severe cold from exposure and died of a fever on Oct.16th. His sons went back to the family home along the Kennebec for they were the first family to settle in Old Canaan or what is now Skowhegan.

Here is what one soldier, Captain Thayer wrote in his journal while passing through Skowhegan: "The carrying place is across an island...The people call this place Canaan; a Canaan indeed! the land is good, the timber large and of various kinds, such as pine, oak, hemlock and rock maple. Last night our clothes being wet were frozen a pane of glass thick, which proved very disagreeable, being obliged to lie in them...The people are courteous and breathe nothing but liberty."

Abner Stocking, another soldier, says "We encountered these hardships and fatigues with great courage and perseverance for the zeal we felt in the cause. When night came on, wet and fatigued as we were, we had to encamp on the ground. It was at this time that we were inclined to think of the comfortable accommodations we had left at home."

"Though this was only sixty rods over, it occasioned much delay and great fatigue. We had to ascend a ragged rock, near on a hundred feet in height and almost perpendicular. Though it seemed as though we could hardly ascend it without any burden, we succeeded in dragging our bateaux and baggage up it."

The doctor, Isaac Senter, went to help a patient up the "Wassarunskeig River." He describes the falls there, "These were a very high water , and exceeding difficult carrying by. After backing all the boats, provisions, camp equipage, etc., over, we again advanced up the river." They carried the bateaux by land and he says "Not far had we advanced ere we came to a fall called Scunkhegon. With a great deal of difficulty we passed this, but not without coming very nigh losing one of my hands. After passing these, I proceeded about half a mile and tented." 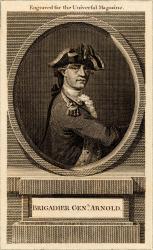 Benedict Arnold was a Brigadier General. He was a respected officer for that period and a great commander.

Here in town there are markers indicating that the army marched through. One of these markers is at the picnic area on Route 2 heading to Canaan. There is another one on the island in town. It is on this island that one of the soldiers left his canteen made out of lead!

Colonel Arnold and his men reached the Great Carrying Place on October 11, 1775, only a few days from Caratunk. He and his men left the Kennebec River as they headed to the Chaudiere River, a boundary between Maine and Quebec.

While working on rocks along the Carrabassett, a geologist found the carving B.A. 1775. Could it be? After all, Arnold did come through here in 1775. Benedict Arnold! In 1775! Maybe one of his soldiers carved it, or maybe we have found Benedict Arnold's writing on the wall!

To learn more about what finally happened to Benedict Arnold's soldiers when they reached Quebec City, and to learn more about the geology of the Kennebec River, the book Arundel, written by Kenneth Roberts and the Maine Easy Finder, Roadside Geology of Maine, are both books not to be overlooked. If you take a drive up to the Forks, you will see more markers along the way showing the Arnold Trail.

Skowhegan Falls before the dams

These falls in Skowhegan caused Arnold's troops many hardships. Because of damage to the a barteaux on these falls, many of their provisions were lost. The casks of peas and bread and fish were cracked open and they swelled up and were no longer usable. There were many miles to go before Quebec!

Benedict Arnold wrote to Captain Farnworth about the provisions for the trip to Quebec through Maine. 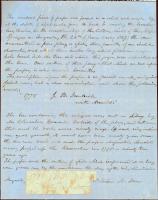 Letter with paper from Arnold's march to Quebec, 1868

This note was written by one of the 1,150 men on the march to Quebec.It was found in a plug in in a tree in Augusta, Maine. It was just to say that the person was there and it was dated 1775. The army reached Quebec with 600 starving men, each of them either simply tired to death, diseased, or starving.They were helped by the good people in St. Annes, Quebec. The best way to know everything about the journey is to educate yourself by reading Arundel by Kenneth Roberts and especially the primary source journals written by the soldiers. One is Isaac Senter, and there are others. Kenneth Roberts also has a book that includes all the known journals written on the way up there.