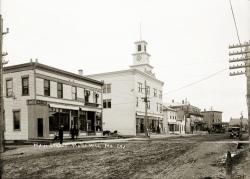 Most communities, no matter how large or small, have a "Main Street" where commercial enterprises have concentrated for generations. The look and content of Main Streets change from year to year, generation to generation, frequently inspiring nostalgia for a previous look or function.

Main Streets may serve as commercial centers, as the focus for government activity and services, as community gathering spots and the center of social interactions, and as gateways to communities, offering services to visitors and residents.

Beginning in the early twentieth century, images of Main Streets were popular fodder for companies that produced postcards. Some cards, with edited and colorized lithographs of Main Street photos, idealized the downtowns of cities and small towns.

Other postcard images, like those shown here, were "true photo" cards. An actual photograph – cropped but largely unedited -- appeared on the card, providing a genuine snapshot of small Maine communities.

All of the Main Street images in this exhibit were taken by photographers for the Eastern Illustrating & Publishing Co., a postcard firm that operated in Belfast beginning in 1909 and that was the largest manufacturer of real photo postcards, making over a million postcards a year in its peak.

Many of the images presented here show Main Streets in Maine towns at the transition point between unpaved roads with horses the main form of transportation and the emerging "modern" town with paved roads, electricity, automobiles and all that those changes brought with them. The businesses, the services they offered, the people who came out to pose for the camera – or the quiet streets with no one visible, all evoke those early twentieth century moments in the lives of these communities.

The Penobscot Marine Museum makes fine art prints from these glass negatives, the proceeds of which help to fund the exhibit and archiving the collection. See details at www.penobscotmarinemuseum.org