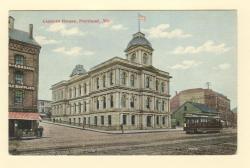 Explore the Port of Portland's History and Custom Collectors

By 1730, the British government, through the Board of Trade, appointed a so-called "Naval Officer" to collect customs (tariffs, register and otherwise keep track of vessels and cargo) in Maine’s largest port. He was the senior officer in what soon became a small but lucrative bureaucracy. The position holder assumed the title of "Collector" in 1758.

With the Revolution and the British burning of the Royal Custom House in 1775, Massachusetts appointed the Collector, and in 1798 the first United States Collector of the Port of Portland was appointed by the president of the United States of America. The last presidential appointment was made in 1960, and after nearly 245 years, the office was abolished in 1974.

The collector of Portland was the key to federal patronage in Maine, though other ports and towns had collectors. Through the 19th century, the collected revenue was the major source of Federal Government income. As in Colonial times, the person appointed to head the custom House in Casco Bay was almost always a leading community figure, or a well-connected political personage.

One of the great curiosities of Portland historical research is that the documentation of the Custom House, and its Collectors, has been largely ignored. Though William Willis devotes a bit to early Naval Officers and Collectors in his celebrated The History of Portland (1865), it is abridged and problematic. Alternatively, the classic maritime chronicler of Maine and Casco Bay, William Hutchinson Rowe in Shipbuilding Days in Casco Bay, 1727-1890 (1929) and The Maritime History of Maine: Three Centuries of Shipbuilding and Seafaring (1948) hardly acknowledges a Custom House. Researchers and students are obliged to read British records, footnotes, architectural history, obituaries and scattered government documents to understand the financial beating heart of this sometime major port. Worse, the Custom records themselves have been scattered, and interest remains focused on vessel types, construction and "Blue Water" adventure. It is our hope that these biographies offer a course change.