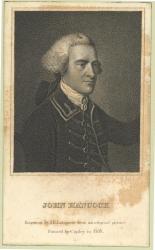 Engraving of Hancock from the Fogg Autograph Collection

Although Maine was not an independent state until nearly 44 years after the signing of the Declaration of Independence, it still has deep roots to the founding fathers. The president of the Continental Congress and the Declaration's most notable signatory, John Hancock, has ties to Maine through politics, and commercial businesses, substantial property, vacations, and family.

Hancock, born in 1737 in Quincy, Massachusetts, recovered from a tragic upbringing to become one of the wealthiest and influential statesmen in the history of the United States. His father died when John was seven and his mother sent him to live with his aunt and uncle, Thomas Hancock and Lydia Henchman. After graduating from Harvard in 1754, Hancock worked for his uncle and eventually took over Thomas' sizable fortune and estate following his death in 1764. As a result, he owned large amounts of undeveloped land in northern New England, including 50,000 acres of timber tracts in Maine.

Although he was considered one of the richest men in the colonies at age 27, Hancock never showed a real interest in commerce or properly managing his wealth. He much preferred to spend his time in the political sphere. Following the passage of the controversial Stamp Act in 1765, Hancock committed his life to politics and worked to enhance the lives of the colonists despite oppressive British rule.

In the late summer 1772, Hancock took a month long vacation to sail up the coast from Boston to Maine. With him, he brought six acquaintances, the most notable of whom was Dr. John Winthrop, a Harvard professor and famous scientist. Among their various stops was the Kennebec River, where part of his massive estate bequeathed from Thomas was located. 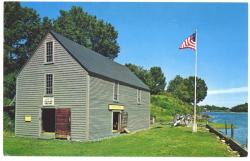 Hancock’s other – and far more active – Maine property lay along the York River. Hancock owned a warehouse and a wharf just east of Sewall's bridge in York for a short period of time in late 1780s and early 1790s. The building, now known as the John Hancock Wharf, was built around 1740 and is considered the earliest surviving structure related to maritime activity in southern Maine. Originally the town's first customhouse following the Revolution, it is believed that Hancock used the colonial warehouse to hide smuggled goods, such as rum and tea, from British customs officers. Hancock was actually arrested once for evading taxes on these goods, leading to the confiscation of his ship. Although there is no direct evidence that he actually visited this warehouse, he may have quickly inspected it while visiting his friend Judge Jonathon Sayward at his house farther up the York River in 1791. The warehouse was added to the National Registry of Historic Places in 1969 and – as of 2017, as a museum run by the Old York Historical Society – still embodies much of its 18th century charm. 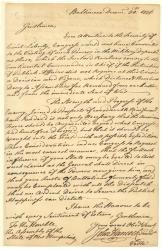 Dr. John. S. H. Fogg of Eliot, Maine collected this letter of Hancock’s as part of his greater collection of all of the signers of the Declaration of Independence

Following the Revolutionary War, where he led a failed siege of Newport, Hancock was elected Governor of Massachusetts (which included Maine) in 1780. Due to his complete engagement in politics, he paid very little attention to his incredible amount of real estate. In late 1781, he was informed that he had lost nearly 20,000 acres of property in northern New England because of his neglect to pay taxes. All in all, this confirmed that his business ventures in Maine nearly all resulted in failures. A second cousin of his, however, chose to remain in Maine. Also named John Hancock, he resided in Orland where he made a career of freemasonry.

Hancock remained governor of Massachusetts until 1785 and then served again from 1787 until his death in 1793. As a tribute to the outspoken founding father, Maine's Hancock County is named after the first Massachusetts governor. Hancock's legacy in Maine continued for many years following his death, where many descendants of his remained for generations.