May and June are graduation season, but it wasn't always so. Before school years became standardized from August or September to May or June, commencements might happen at other times of the year. 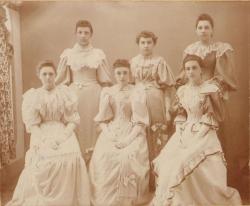 Other traditions also have changed. Until the 20th century, few high school students wore caps and gowns when they completed their studies. Class sizes often were quite small, especially in rural areas or where the school charged tuition. Latin commonly appeared on graduation programs and in courses of study.

Graduation speeches were less inspirational, intending, instead, to demonstrate what students had learned. A good example comes from Bowdoin College in Brunswick, which held its first commencement in 1806. Hatch's History of Bowdoin College (1927) notes, "several specimens of the improvement of the students were exhibited to a small but respectable audience."

The history also states that for more than 70 years, each graduate was assigned a "part" based on class standing, and gave a speech on the assigned subject. Some of the orations were delivered in Latin or Greek.

In the 1860s, according to the history, a newspaper reporter wrote, "Commencement audiences generally most certainly at Bowdoin are fast getting wearied of the tedious display of young rhetoric." In 1860, there were about 55 graduates.

This exhibit features several graduating students' letters, images of graduates, diplomas, and programs from the 19th and first decade of the 20th century, suggesting the ways in which commencement has changed.