Maine Memory Network
> How Do Your Hens & Chickens Prosper?

How Do Your Hens & Chickens Prosper?

Dr. Freeland Holmes enlisted as a surgeon in the 6th Regiment of Maine Volunteers in March 1862. He and his wife, Caroline Washburn Holmes, frequently wrote to one another about home life in Maine. Letters from family members and loved ones kept morale alive.

In one letter, Freeland wrote, "I think your letters all come very promptly, for which I feel very thankful. Be sure that someone writes me every other day for awhile." Soldiers like Freeland wanted to make sure that everything was running smoothly at home as it kept a sense of normalcy.

In one of his letters to Caroline, Freeland asked, "How do your hens & chickens prosper?" While this question seems mundane, it was essential for Freeland to know that matters were being taken care of at home and that his wife Caroline and their children were faring well.

The constant stream of information in reference to life in Foxcroft and his father-in-law’s well being gave Freeland a sense of how life was at home. These letters were not only helpful in terms of sharing information but they served a deeper purpose, of keeping the soldiers minds on the battlefield and their hearts at home.

Caroline Ann Washburn was born on January 30, 1830 to Israel and Martha "Patty" Benjamin Washburn in Livermore. She attended primary school in Livermore and then attended Waterville Liberal Institute and Gorham Seminary. While visiting her brother Israel Washburn in Orono, she met Freeland Salmon Holmes of Dover-Foxcroft.

Freeland Salmon Holmes was born in Dover-Foxcroft to Salmon and Abigail Blake Holmes on September 8, 1827. He remained in his hometown for much of his adolescent life, until he went Bowdoin College in Brunswick, graduating in 1850. Holmes then went to Calais to study medicine under his uncle, Dr. Job Holmes.

In 1854, Freeland completed his studies at Columbia College in Washington, D.C., and later took over Dr. Josiah Jordan’s practice in Orono.

Freeland and Caroline were wed on June 3, 1857 in Livermore. They settled in Dover-Foxcroft where they soon started their family. Fanny Washburn Holmes was born on July 3, 1859, and three years later, on June 8, 1862, Frank E. Holmes was born. 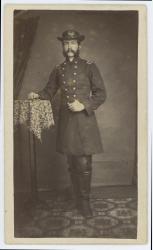 During the time of Freeland’s enlistment, the 6th Maine was involved in a number of key battles including those at Antietam, Fredericksburg, Gaines' Mill, Williamsburg, and Chancellorsville.

After just over a year in the army, Freeland died of diphtheria on June 23, 1863 in Germantown, Virginia. After his death, Caroline, Fanny, and Frank moved back to her family’s home in Livermore.

Life for Caroline and the children was not easy after Freeland's death. Proof of relation and marriage was necessary in order for wives to receive benefits. This is evident in Caroline’s letters to H.C. Leonard and her correspondence with the United States Army.

Leonard had performed Caroline and Freeland’s marriage ceremony in 1857. On September 2, of 1863 H.C. Leonard responded to a letter from Caroline where he shared his condolences for Freeland’s passing and asked for further information of Freeland. This information was to be included in the couple's proof of marriage.

Leonard wrote, "I will give you a paper certifying that I performed the rite of marriage at the time of your and Dr. Holmes’ wedding, but I shall need from you the date of the day and the Dr.'s full name."

Caroline, Fanny, and Frank stayed in Livermore until Caroline’s father, Israel Washburn Sr., died in 1876. Caroline later moved to Wisconsin to be closer to her brothers Cadwallader and William. She died in 1920 and is buried in Rural Grove Cemetery in Dover-Foxcroft.

Return to "The Washburns of Livermore"

In this letter Freeland wrote home to his wife inquiring about day-to-day issues that husbands and wives contend with.

When Freeland died of "Camp Fever," his wife, Caroline, was required to prove that she and Dr. Holmes were married in order to receive his military death benefit.

An elderly Caroline Washburn Holmes just prior to her death in 1920.

Return to "The Washburns of Livermore"