Scarborough: They Answered the Call 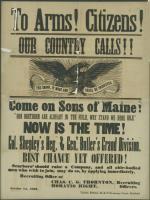 To Arms! Citizens! Our Country Calls!! Come on sons of Maine! Our brethren are already in the field; why stand we here idle! Now is the time! Best chance yet offered!

An October 1861 Civil War recruiting poster used peer pressure to urge able-bodied men of Scarborough to join their brethren already in the fray. The poster also implied that benefits of signing up immediately would be better than previous offers. The recruiting officers, Charles C. G. Thornton and Horatio Hight, were Scarborough men.

Most of Scarborough’s townspeople were staunch supporters of the Union, and appeals to enlist in Civil War regiments were taken seriously. Brothers, cousins, friends and neighbors answered the call. Among them were many from the Libby, Milliken, Pillsbury, Coolbroth, Rounds and Waterhouse families.

Charles Thornton, Auditor of Accounts for Scarborough, resigned his office on October 19, 1861 and enlisted on November 15, 1861.

Berry family legend tells of young Hiram, a Pillsbury family handyman, who met a Union recruiter when sent for water one day. Hiram enlisted on the spot and never returned with the water, but instead went off to war.

At the dedication of the Soldiers’ Monument in Dunstan in 1913, the Hon. Augustus Freedom Moulton remarked: "During the Civil War no town and no place surpassed the patriotic record of old Scarboro. Every quota was promptly filled. Every requisition was promptly met. The town was depleted of its young men. In all the great battles in the East, Bull Run, Fredericksburg, Antietam, Gettysburg and the rest the men from Scarboro took part, and in the far South, New Orleans, Port Hudson and Red River and elsewhere our boys were present and did their duty."

While not unique in its response, Scarborough did meet every quota. In all, approximately 240 men from the town, which had a population of about 1,600, answered the call and served in the war.

This number included some men from other towns who signed on to fill Scarborough’s quotas and receive bounty money. Others signed on as substitutes for Scarborough men and received a commutation fee, as did Joseph Coy of Portland, a substitute for Simon Libby of Scarborough.

During the war years town warrants seeking approval for monies needed to pay bounties, commutation fees, and support of soldiers’ families were posted in the stores of Freedom Milliken, Joseph Sherman and John Higgins.

Of this group, 33 volunteered, one was drafted, 5 furnished substitutes, and 5 paid commutation, leaving Scarborough a credit of 4 men toward a future call. The 33 men were paid a bounty of $310 each; the other 11 were paid $300 each. Anticipated calls and expenses for the following year were also reported.