The hundreds of Eastern European Jews who came to Portland in the late 19th and early 20th centuries started synagogues to observe their differing Orthodox religious traditions.

One small group of Chassidic Jews from Poland, Belarus and other nearby countries first gathered as a congregation before the turn of the 20th century, built Bas HaKnesses Anshe Sfard synagogue in the Bayside area of Portland in 1917, and started their own cemetery in 1924.

They were part of a thriving and energetic Jewish religious, business, and civic community. By 1957, the synagogue was largely without a congregation.

While little physical evidence remains of Anshe Sfard, the congregation's story is emblematic of the ways an immigrant group settled in a new country and then began to assimilate, and the effects of those changes on religious institutions.

The Portland Chassidic group that became Anshe Sfard followed traditions slightly different from other Orthodox synagogues in the area. Before building their own synagogue, they met in several locations in the India Street area, including Bet HaMidrash HaGadol, known as Abrams’ Shul, on the corner of Hampshire and Fore Streets, and after 1904, in the basement of the old Shaarey Tphiloh on Newbury Street. 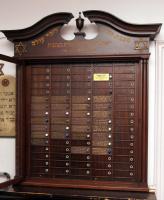 All of the congregations between 1866 and 1947 were Orthodox during this period of immigration and early assimilation. Anshe Sfard’s prayer book was a bit different from most, but the same as that of Chabad Lubavitch, founded in the late 18th century by Shneur Zalman. The group takes its name from Lyubavichi, the Russian town where it was based until the early 20th century.

As Jewish immigrants arrived and formed communities, they started many businesses and mission-driven organizations for both men and women such as sisterhood groups and various chevrei kadisha, including burial societies.

Even though Mt. Sinai Cemetery had existed since 1894, Anshe Sfard purchased property on Hicks Street in Portland from Howard Reiche and in 1924 had its own cemetery.

In 1917, led by Abraham Siegal, Abraham Isenman and David Finkelman and others, Bas HaKnesses Anshe Sfard constructed its own synagogue at 216 Cumberland Avenue.

The interior of the synagogue was typical of the Ashkenazic style of the time, with the ark that held the Torah scrolls in the front of sanctuary, and the bimah, or dais, in the middle. The second floor was a three-sided loft where the women sat. The kitchen was in the basement.

There were two wall paintings located on the north-facing interior wall of the building, the façade on Cumberland Avenue. Although difficult to make out in a photo taken when the building was being demolished, one appears to be a rendering of an aqueduct, perhaps meant to evoke the one at Caesarea on the coast of Israel between Tel Aviv and Haifa. The other may be of olive trees.

Carl Lerman, a former Anshe Sfard member, recalled that there were paintings of the zodiac symbols on the walls of the sanctuary.

As the Portland Jewish community suburbanized, Anshe Sfard fell on hard times. New synagogues in the Woodfords area of Portland replaced those of their immigrant forebears that had been built on the Portland peninsula.

Anshe Sfard remained at its corner spot where Wilmot Street and Cumberland Avenue met – in a neighborhood that was no longer predominantly Jewish.

By the mid to late 1960s, Anshe Sfard was abandoned and boarded up. Urban renewal hit the Bayside area hard. Whole neighborhoods were torn down to accommodate a cross-town thoroughfare, Franklin Arterial, and a large housing complex, Franklin Towers.

Two yahrzeit plaques went to Etz Chaim on Congress Street. These memorial boards currently hang in the chapel. Perhaps as many as six Torahs were saved from the building; some were given to local synagogues and one to a synagogue in Israel.

LEARN MORE about Chassidic Judaism and the story of Anshe Sfard and its founders.

Susan Cummings-Lawrence has been researching Jewish history and identifying historical resources relating to Jews in Maine since 2007.