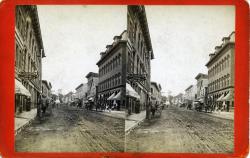 Stereo views taken in the 1870s portray Rockland as a bustling city with beautiful architecture, an active harbor, productive quarries, charming homes, and inviting hotels. These views entertained Rockland families and promoted the virtues of Rockland to business associates and visitors from far away.

The Rockland Historical Society owns a large collection of stereo views of Rockland taken in the 1870s and published as stereograph cards by Frank Crockett.

From the 1850s to the 1940s, large publishing houses produced stereo cards with double images taken using a stereo camera with two lenses, side by side. The stereograph cards were viewed in a hand-held stereopticon with lenses that gave each image an enlarged, 3-D appearance.

Stereographs were entertaining and educational. Often sold in boxed sets of 60 or 100, stereographs took the viewer on a tour of landmarks of England, France, Europe, Egypt and other destinations. They recorded scenes from the Civil War, the Boer War, and other important historical events.

Local stereograph publishers like Frank Crockett produced images to promote their hometowns. They photographed landmarks and symbols of progress --- mercantile streets, churches, schools, mansions of the rich, seaside views, how people lived and worked. The most popular local stereo views were of summer resorts.

Crockett used stereographs to promote Rockland to potential tourists and among businessmen in far off ports who were entertained by sea captains from Rockland who carried stereopticons aboard their ships.

Ann Morris is curator of the Rockland Historical Society.