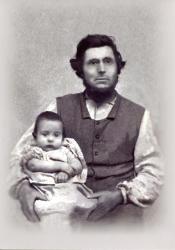 From 1850 to 1865, John Young Merrill (1823–1898) kept tiny – less than 5 by 3 inch – diaries that reveal an industrious jack-of-all-trades, but also a man involved in his community and national issues such as temperance, spiritualism, and politics.

In 1850 the census lists him as a shoemaker, and then in 1860, as a farmer. He had a small "10 footer" shoe shop beside his house where he assembled shoes and boots from materials sent to him on consignment from a company in Massachusetts.

Later, he appeared to travel to Winthrop for days at a time to work at one of the shoe factories there.

The 11 years of the diaries record the continual, seasonal rhythm of agricultural activities such as "threshed had 21 bush oats 4 bush barley," "planted turnips," "shelled out last of corn," and "bot 10 chickens of S,L,Howard 60 cts."

But these two officially listed occupations don’t begin to account for all the varied activities he was involved in, augmenting his meager farm or shoe-making income. He quarried stone building foundations for houses, barns, bridges and schools, and jacked and moved barns and houses.

He built caskets, fixed bobsleds, hooped barrels, dug wells, and was a Constable, Surveyor of Highways, and Tax Collector for Leeds. Numerous entries detail his trips to Harpswell to purchase large quantities of fish that he took back to Leeds to market locally.

Another of John’s enterprises was making herbal salve that he sold to friends and neighbors – and advertised in a local paper. Many entries in his diaries make note of various ingredients he purchased for this salve, such as saleratus (baking soda) or white rosin.

In 1854, at the age of 31, John Merrill joined the Sons of Temperance, a brotherhood of men who promoted the prohibitionist movement. By the beginning of the 1850s, Maine was considered a leader in the movement, and John Merrill was a stalwart participant. 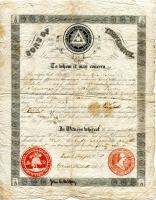 As John Stinchfield wrote in his History of Leeds, Maine, "Mr. Merrill…was repeatedly elected Constable of Leeds, and many were the precepts he served and the quantities of liquor he spilled. He regarded his oath of office sacred and binding, and never swerved from duty for the sake of friendship, nor accepted hush-money."

In the 1860 diary entries, there’s a sudden and surprising appearance of many references to the purchasing of gin, brandy and wine, which does not seem to align with his temperance involvement.

The mention of alcohol increased proportionately with those entries, noting that Dr. Cochran had come to see Nancy, his young wife. She was dying, apparently of tuberculosis, and much of the liquor he bought probably was for her, used either as a tonic or to ease the symptoms of the disease.

On June 19, 1860, Merrill wrote the following entry, "Nancy My Dear, loved wife the Mother of my sweet little Edwin Died this morning about 6 o clock which has left me alone with my babe in the world She was 33 years 22 day of last January." With the exception of one or two entries mentioning wine or gin, that also marks the end of entries about alcohol. 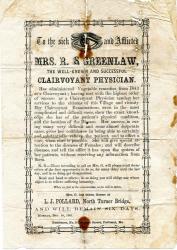 Nancy’s death also marked the beginning of John Merrill’s mention of Spiritualism. There is no evidence in his diaries that he was a church-going individual, but at Nancy’s funeral on June 21, 1860, he noted in his diary, "… funeral addressed by or through Charles Hayden in a clear and Easy manner the first Spiritual speaker at a funeral in town caused a great talk."

John's choice of funeral speaker reflected a growing national interest in the belief that an individual's existence and personal identity continued on after death, and that the dead could be contacted through individuals described as mediums. Charles Hayden was such a person.

Over the following months, there are numerous entries showing that John Merrill continued to attend Spiritualist meetings, most likely hoping to have contact with Nancy. In 1861 he went to see Mrs. R. S. Greenlaw, a clairvoyant physician, who was speaking in North Turner.

In 1865, Merrill met with Cora Hatch in Greene, where his mother and in-laws were "examined by" her. Cora Hatch was arguably the best-known trance speaker in the U.S.

Merrill regularly attended town meeting in Leeds and Greene, a nearby town, and his entries note important state and national events that aligned with his political interests. With the split of the dominant state Democratic party over issues of prohibition and antislavery, there are numerous entries related to the newly formed Republican party such the election of Anson P. Morrill’s and subsequently, Hannibal Hamlin, as governor, Israel Washburn speaking in town, and Merrill casting a vote for the Lincoln-Hamlin ticket.

The presidential election of 1856 was especially heated with the issue of slavery expansion pitting John Fremont, Republican, against James Buchanan, Democrat. Merrill’s entry for August 23, 1856 reads, "…hoisted flag down to village for Freemont." After the election where Maine went for Fremont, John noted that on Nov 11, " …the Democrats were firing all night and stole the Freemont flag."

The dominant national climate when Merrill wrote the diaries was the buildup and eventual start of the Civil War. His sympathy for the abolitionist cause and those who risked their lives in belief of it are evident years before then. 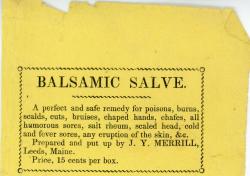 He mentioned events such as John Brown’s hanging, the attack on Fort Sumter that began the Civil War, local enlistments and the wounding of native sons, Oliver Otis and Charles Howard, in the battle of Fair Oaks.

He recorded the biggest national tragedy after the elation of winning the war in exacting details: April 15, 1865, "President Abraham Lincoln shot last night died this morning at 20 minutes past 7 by John Wilks Booth in Fords Theatre Washington D,C,"

John Merrill’s diaries ended in 1865, but he lived another 33 years. He never remarried, and Edwin was his only surviving child.

By all accounts Edwin was as industrious as his father. He continued to live in Leeds, working the family farm and expanding the sawmill his father started. He was the last of the Merrills to be born, live and die in Leeds.

Merrill's diaries provide a fascinating glimpse into the life of a mid 1800s family.

Laura Juraska is the president and Pamela Bell is a board member of the Leeds Historical Society.