Belfast During the Civil War: The Home Front

Harbor View of Belfast, from the east side, 1860

The War of The Rebellion (1861-1865), better known today as the American Civil War, was a defining event, perhaps the defining event of the American experience. It would affect every community in the United States and, in one way or another, continues to shape our national political, social and cultural circumstances.

On the eve of the war Belfast was a bustling, prosperous community of 5,520 people. Established as the Waldo County seat in 1827, and with a government re-organization as a city in 1853, Belfast was firmly entrenched as the hub for both commercial and judicial business.

Belfast as it looked post-Civil War

With abundant timber, a gently sloping waterfront, an established downtown and close proximity to varied agriculture, Belfast was an important shipbuilding and trading center with connections to eastern seacoast ports and worldwide harbors.

In the decade just before the Civil War over 100 ships were built in Belfast and nearby towns and nearly 30 percent of men were employed in the maritime and shipbuilding trades.

Much of this trade, vital to the local economy, was interrupted following the news of the attack on Fort Sumter on April 12, 1861.

When the war began, most Northerners expected it to be over quickly. Eager to enlist before the war was over, men from local towns and counties flocked to Belfast to enlist at one of the nine recruitment offices.

The Belfast City Greys, established as a Belfast militia company in 1857, formed the core of the first round of recruits and joined the ranks of the 4th Maine Regiment mustering in Rockland.

For four years the war seemed to be on Belfast’s doorstep. News from the battlefields where Maine men were engaged was reported in depth in the two local weekly newspapers, the Republican Journal and the Progressive Age.

Letters sent from soldiers to family back home were full of anecdotes about life in the army and the trials of battle.

The Home Guard was active in protecting the harbor from Rebel raiding parties and had built two batteries, manned and armed at all times. 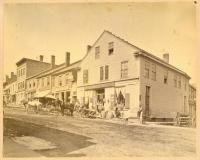 The navy also had a presence. At several times during the war years ships were anchored in the harbor for both recruitment purposes and for protection.

The Ladies Volunteer Aid Society heeded the call from the Sanitary Commission and contributed a steady supply of personal items and foodstuffs to the soldiers.

In June 1864 they also sewed a special inspirational quilt, destined for a soldiers’ hospital in Washington. The story of this quilt has established a lasting legacy.

Eight hundred fifty eight men fought during the war in both the army and the navy. More than one hundred did not return.

All For the Union

On the home front Belfast citizens, as well as the Ladies' Aid Society, kept supplies moving to the soldiers in the field.

On June 17, 1864, a group of young women began to stitch a lasting legacy, a quilt for a soldiers' hospital.

After the war, honoring the veterans who served -- and those who died -- was an important activity.