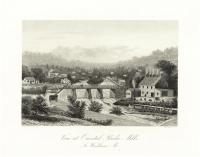 The Oriental Powder Company in Gorham-Windham produced more than one-fourth of the military-grade gunpowder used by the Union forces during the Civil War. Peak annual production during the war years exceeded 2,500,000 pounds.

Gunpowder production began there in 1824 at Gambo Falls on the Gorham side of the Presumpscot River. After about ten years, operations were expanded to the Windham side of the river.

The waterpower to drive the machinery was harnessed by damming the river and channeling water through various control gates and raceways connected to the mill operations. 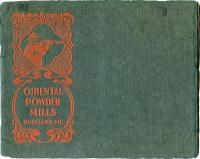 Men from Gorham, Windham, and other surrounding towns found high paying jobs at the powder mill, despite the inherent danger of explosions. A total of 46 men lost their lives in mill-related accidents that occurred during the years of gunpowder production at Gambo.

During its many years of operation the powder mill ran under several names and owners. It was, and continues to be, referred to by locals as the Gambo Powder Mills, by virtue of its location at Gambo Falls.

According to official records, the powder mill's first owners (Fowler and Laflin) were gunpowder makers from Massachusetts. In 1832, the operation was acquired by Oliver Whipple of Lowell, Massachusetts, and expanded on both sides of the river.

In 1855, the business was sold to Newhall and Company, and in 1859 the company name was changed to Oriental Powder Company.

When the Civil War ended, the demand for military gunpowder fell sharply, and the Oriental Powder Company went bankrupt. However, in 1872 it was reincorporated under the name Oriental Powder Mills, and gunpowder production continued there for another 32 years under various owners. Production ceased in 1904, after 80 years.

Visitors to the Gambo Falls area can access a walking trail that leads past some of the old mill foundations that remain intact along the Presumpscot River.

The Oriental Powder Co. argued that it needed young men as workers to produce gunpowder and could not afford to have them drafted.

The Gambo Powder Mills -- important to the Union war effort -- had more than 50 structures along both sides of the Presumpscot River.