Images from the archives of the Penobscot Marine Museum

Tourism in Maine has its roots in the years prior to the Civil War; after the war, it increased dramatically. Early tourists called themselves "rusticators" and arrived in Maine by stage coach or cargo schooner to enjoy the country lifestyle and wholesome air of the Maine coast. Artists discovered the scenic beauty of the Maine coast in the mid-19th century, and their paintings enticed wealthy patrons to the state from Boston, New York, and other cities.

In the second half of the 19th century, vacations became fashionable among middle and professional class citizens, who transformed the coast and islands with large hotels, some with as many as 400 rooms. Rusticators from large East Coast cities gravitated to specific Maine towns: Bostonians to North Haven and Philadelphians to Camden. 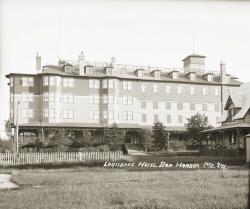 Visitors were not always "from away." Often they came from Maine’s major cities: Portland and Bangor. Passenger steamers carried visitors from Boston to Bangor with stops at Belfast and other towns along the way. The railroad also linked Boston to Bangor, where summer visitors could then take a spur line. Eventually the wealthier tourists built their own cottages, many in planned developments, as the middle classes filled the hotels. Developers began to buy up oceanfront land from local families.

The arrival of rusticators, middle class vacationers, and wealthy cottagers began the gradual displacement of maritime community families. Because Maine’s traditional industries were in decline, some families had no choice but to sell their land to summer people or developers. Others took jobs as cooks, gardeners, and servants for vacationers. In some towns, the summer population was larger than the year-round census. By 1920 tourism had become the most important source of revenue for many coastal towns.

The first half of the 20th century was a time of rapid growth for tourism in Maine. While coastal communities and islands had attracted summer people for decades, vacation practices changed immensely as automobile ownership surged in the 1920s. Long leisurely stays at a summer hotel, boarding house, or one’s own summer "cottage" became less common as auto touring became popular. As Americans took to the road, amenities and tourist attractions proliferated, especially along Route 1. Most sold postcards. 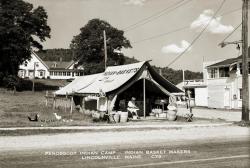 Summer Folk: The Postcard View provides a glimpse of summer as experienced by wealthy "rusticators," touring vacationers, children at summer camp, and local residents from about 1910 into the 1940s. The exhibit was part of the Penobscot Marine Museum’s campus-wide Summer Folk: The Tourists of Penobscot Bay exhibit during the 2012 season.

The images are from the museum’s collection of nearly 50,000 glass plate negatives from the Eastern Illustrating and Publishing Company, a postcard company once headquartered in Belfast. Herman Cassens founded the company in 1909 when the postcard industry was booming. While he had a good sense of the subjects that would sell well, his itinerant photographers always asked for suggestions from local people, especially business owners who might sell the cards in their stores or lodging businesses. The Eastern Illustrating and Publishing Company sold millions of black and white "real photo" postcards for nearly 40 years.

Postcards were an easy way for vacationers to share their pleasures and discoveries with the folks back home. Postcard images offer a view of places and subjects of interest to visitors or important to local communities at the time they were photographed. Because Eastern photographers often photographed the same places many years later, the images are a record of change over time, too. Many of the images revisit town centers, hotels, or harbor views twenty years after the first photo was taken.

The images trace Penobscot Bay tourism from steamboat to Model T to camping trailers; boarding houses to summer resorts to roadside cabins; dance halls to Methodist camp meetings; summer mansions to cottage colonies; yacht races to tourist traps. The captions tell the stories of people, places, and the pleasures of the season.