Alvin Record and Hugh J. Chisholm, prominent leaders, were the developers of four pulp and paper mills in Jay, Livermore, and Livermore Falls along the Androscoggin River. The river was chosen because of the waterpower that it provided. The mills gave an economic boost to the area and spurred development in the towns. 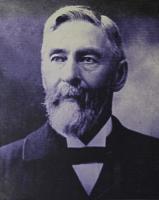 The towns became prosperous with the influx of immigrants who worked in the mills and helped develop the towns. Eventually between 1877 through 1897 all the mills became known under the title of International Paper Company.

Alvin Record, born in Greene in 1829, moved with his parents to Moose Hill in the Livermore Falls area when he was 14. After the Civil War, Record purchased a building in Livermore Falls that had been converted from a dairy factory to a sawmill. He in turn converted it to a leatherboard mill.

Leatherboard was a wood product that, when pressed into cardboard and combined with an imitation leather grained surface, was used for binding books. It was also used in the manufacture of shoes. 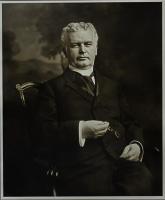 Record purchased the water rights from the dairy factory in 1877 and constructed a dam across the Androscoggin River and added a small pulp mill located near the leatherboard mill in Livermore Falls. He employed 60 men with a monthly payroll of $1,300.

Hugh J. Chisholm came to Livermore Falls in 1881 and founded the Umbagog Pulp Company. He built the Umbagog mill directly across the river from the Alvin Record's pulp mill on the banks of what eventually was called Route 4 in Livermore.

After Hugh Chisholm built the Umbagog Paper Mill in Livermore, Record built a second mill a short distance up the Androscoggin River. An island divides the river and dams were built on both sides of it. Record installed two paper machines there and the mill was known as Jay Pulp & Paper Company.

Three years later, Record built the Falmouth Mill with two more paper machines. It was located in Jay Bridge. Along with a sawmill, the whole complex became known as the Jay Pulp & Paper Company.

Chisholm enlarged the Umbagog mill to two machines in 1885. This increased the mill's daily capacity from 30 to 50 tons.

This mill manufactured heavy wrapping as well as board papers, which were used in bottle caps and lining caskets.

The area became quite prosperous by 1890 so Record, who had been helping people with their finances, and about a dozen other prominent people started a local banking institution. In 1895, the Maine Legislature granted a charter to the bank, the Livermore Falls Trust and Banking Company.

Chisholm purchased the sawmill and water rights in 1887 from the Oliver Otis family at Otis Falls, now known as the community of Chisholm in Jay.

It is here that the name Otis Mill originated as well as the community of Chisholm.

Chisholm built a small mill on the site of the present Otis Mill in Jay along the Androscoggin River. Originally a tiny one-machine mill, it became incorporated under the name of the Otis Falls Pulp & Paper Company in 1888 with Chisholm as its president. 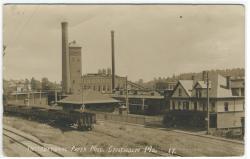 About this time Chisholm moved his general offices to Portland where they remained until International Paper Company was formed in 1897.

On September 15, 1898, fire leveled International Paper's Record pulp and paper mill, saw and grist mills, along with several other smaller industries, stores, homes and other buildings which comprised the bulk of the industrial and commercial section of Livermore Falls. Many never rebuilt.

This mill developed rapidly in 1894 when Edwin Riley came upon the scene. By 1898 the Otis Falls Mill was the most modern and largest newsprint mill in the world.

Chisholm started construction on a new and much larger log crib type dam across the river and started to install 6 new grinders (7.5 tons per day capacity) complete with wet machines.