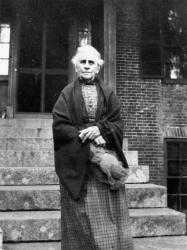 Before women like Rebecca Usher of Hollis could become Civil War nurses, the Maine Legislature passed a law in 1861 "to accept the services of females as nurses in the army."

Many women responded. Dorothea Dix (1802-1887), a native of Hampden, who moved to Massachusetts when she was 12, was Superintendent of Nurses for the Army. She set standards for the nurses, including that they had to be older than 40.

Some, like Usher -- who was 41 when she became a nurse -- were single. Others, like Sarah Sampson of Bath, took up nursing when their husbands or sons enlisted -- and sometimes got their own taste of the battlefield. Others, like Ruth Mayhew of Cranberry Isles and Surry, were widows.

Usher (1921-1912) was the daughter of Ellis B. Usher and his second wife, Hannah Lane Usher. Her half-sister, Sarah Usher Bacon, and her younger sisters, Martha Usher Osgood, a widow; and Jane (Jennie) Usher, all worked on the war effort at home in Maine.

Usher -- and most other Civil War nurses -- had no medical training. Still, Usher was well educated. She attended schools in Maine and then, at her own request, studied at the Ursuline Convent at Trois Riviers, Quebec, in 1840-1841 because she wanted to learn French.

The connection to the homefront was important for the nurses as they sought clothing, food items, and some medical supplies from the women who were involved in relief efforts at home. Martha Osgood (1823-1893) founded the Buxton-Hollis Soldiers' Aide Society, Sarah Ellen Usher Bacon was active in the Maine Camp Hospital Association in Portland, and Jane (Jennie) helped raise funds for soldiers through concerts.

Usher began her nursing service in late 1862 at the U.S. General Hospital in Chester, Pennsylvania. Her letters to family members describe the role of nurses, comment on the war and the attitude of soldiers, and give a sense of what was happening in Philadelphia and in Washington, D.C. during the war.