For the Union: Civil War Deaths 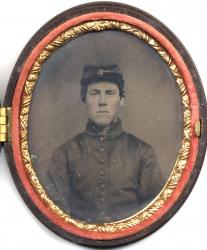 Death was the common experience for soldiers and families, North and South. The bloodiest war in American history claimed an estimated 620,000 soldiers and sailors, and an uncounted number of civilians.

Families were not always sure of the fate of their sons or husbands. Sometimes soldiers' friends or officials notified families of deaths or serious illness or injury. Sometimes families wrote letters in desperate attempts to get information when they had not heard from their relative for a long time. Most of the soldiers who died during the war were buried at the battle site or in national cemeteries near where they died.

Exact statistics are difficult to discern, but estimates put the number of Maine men who died in Civil War service at about 9,400.

The 1st Maine Cavalry has the unfortunate distinction of having the most men killed in action of any cavalry unit during the war. The 1st Maine Heavy Artillery suffered the largest losses of any regiment in a single battle – an ill-fated charge at Petersburg in June 1864. The regiment went into this engagement with about 950 troops; 210 were killed or died of wounds received, and almost 400 more were wounded and survived.

Remembering those who died and those who served became a common activity after the war.

The attached slideshow contains a small representation of those who died while serving in Maine Regiments.